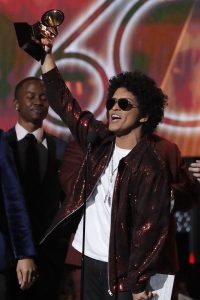 The 60th Annual Grammy Awards ceremony took place on Jan. 25, with artists Bruno Mars and Kendrick Lamar taking home the most trophies. The Grammys opened with an electrifying performance by rap phenomenon Lamar. He brought the crowd to their feet with songs from his hit album “DAMN.,”  displaying a U.S. flag behind him throughout the performance. The night showcased many talented singers and rappers performing many of their top singles.

Hawaiian native and pop star Bruno Mars swept the board, taking home all six awards that he was nominated for. For the “general field” category, Mars was nominated for Album of the Year, Record of the Year and Song of the Year. These three are the most coveted trophies to come away with at the Grammys. He was competing in these categories against accomplished artists like Jay-Z, a 21-time Grammy award-winning artist; Kendrick Lamar, Childish Gambino, Justin Bieber and others.

Bruno Mars’ most famous songs this year, “24K Magic” and “That’s What I Like,” were among the winners. Along with the top three awards he also won for Best R&B Performance, Best R&B Song and Best R&B Album. Mars and new artist Cardi B took center stage when they performed their new collaboration “Finesse,” which had all the fans excited.

After Kendrick Lamar performed the opening act, it only got better for him. Lamar’s album “DAMN.” includes many songs that held a spot among the top 100 songs throughout the year. Lamar was nominated for a total of seven Grammys and brought in a stunning five this year. His most famous song this year, “HUMBLE.,” earned awards for Best Rap Song, Best Rap Performance and Best Music Video.

Lamar also came away with the award for Best Rap/Sung Performance for “LOYALTY.” (featuring Rihanna) and Best Rap Album. He now has a total of 11 Grammys along with many other awards. In his performances during the ceremony he paid tribute to some of the artists who have inspired him on his musical journey over the years, such as Nas and Jay-Z.

The Weeknd collected his third Grammy for his exotic album “Starboy,” winning the Best Urban Contemporary Album. Colombian-born Shakira also won her third Grammy with the Best Latin Pop Album. Cardi B did not leave with any trophies but has put herself on the map with the hit song “Bodak Yellow.”

The 2018 Grammys was not all about music, however. The ceremony touched on politics and highlighted tragic events that struck the world this past year. The Brothers Osborne, Maren Morris and Eric Church performed Eric Clapton’s “Tears in Heaven” in commemoration of the victims of the mass shooting in Las Vegas on Oct. 1.

In her introduction of Kesha, Janelle Monáe delivered powerful remarks in support of women in the industry, saying: “Time’s up. We say time’s up for pay inequality, time’s up for discrimination, time’s up for harassment of any kind, and time’s up for the abuse of power.”

There were many instances where shade was thrown at President Trump. Following Bruno Mars’ performance, comedian Trevor Noah  said: “Bruno Mars and Cardi B, that was amazing, wow. I love that song, man. Like, I love that song. It takes me back, you know, like way back to when Trump wasn’t president.” Possibly the biggest surprise to all came when Hillary Clinton appeared in a prerecorded skit mocking the current president by reading from the book “Fire and Fury” along with musical artists.

Perhaps the most moving performance was by new artist and inspirational rapper Logic when he debuted his single “1-800-273-8255” (the suicide hotline number) in an effort to give hope to all who are facing depression or are suicidal. The Grammys was filled with great music, touching tributes and comedy to make it one to remember.