Eagles Have a Shot at Winning Super Bowl LII 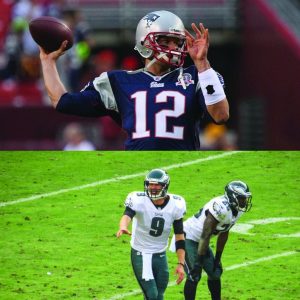 With Super Bowl LII approaching on Feb. 4, airing at 6:30 p.m. on NBC, the New England Patriots will look to win their sixth championship while the underdog Philadelphia Eagles will attempt to win their first ever Super Bowl. Both of these teams held the best record in their conferences throughout the regular season.

The Eagles, however, are facing a significant injury to MVP candidate and star quarterback, Carson Wentz, who tore his ACL in week 13 of the regular season. With the upcoming matchup, the Patriots will have reached the Super Bowl 10 times, with Tom Brady leading eight of those campaigns. Will the Patriots’ prior Super Bowl experience help them prevail over the Eagles, or can backup quarterback Nick Foles lead his team to their first-ever championship victory?

Tom Brady, arguably the greatest quarterback to step on the field, has led the Patriots to all five of their Super Bowl wins, and is eager to win his sixth. Charles Haley is the only other player in NFL history to have five championship rings, so Brady is in pursuit of breaking his record.

The Pats are said to have the edge over the inexperienced Eagles for many reasons. First, their quarterback led the NFL during the regular season in passing yards this season with a remarkable 4,577 yards. Along with that, Brady has also thrown for more yards than Eagles quarterback Nick Foles this postseason.

Second, the Patriots also have a top 10 regular season receiver in Rob Gronkowski who plays at the tight end position. But “Gronk” suffered a head collision with a Jacksonville Jaguars defender in the AFC conference championship game and is currently listed as questionable for the big game.

In the playoffs, wide receiver Danny Amendola for New England has the third most receiving yards. Most importantly, though, the Patriots know the Super Bowl atmosphere and understand how to deal with the pressure, especially after last year’s historic comeback over the Atlanta Falcons. Brady and the Patriots may be the favored team to win, but the Eagles cannot be ruled out quite yet.

The Philadelphia Eagles have tied their own record for best season in franchise history with only three losses and 13 wins this season. Before Wentz suffered his ACL injury, the Eagles had only lost two games out of 13 and Wentz was clearly making his case for MVP. Under second string quarterback Foles, the Eagles won two out of their final three regular season games, maintaining the number one spot in the NFC. Philadelphia may be the more inexperienced team, but their drive may help them beat the Patriots.

The birds continued to fly over both the Atlanta Falcons and Minnesota Vikings this postseason despite being considered the underdogs. The Eagles defense stepped up against the Vikings in the NFC conference championship and only allowed seven points total for the game, the second fewest by any playoff team this postseason. After back-to-back wins against the odds, the Eagles believe that they can do the same against the mighty Patriots. Another reason why Philly may come out with a win is that they are more hungry for a ring, especially if it’s against the Patriots. The Eagles lost to New England in 2004 at Super Bowl XXXIX.

More good news for Philadelphia is that in 2007, the Patriots had a perfect regular season record and still ended up losing the Super Bowl to the New York Giants. In 2011, the Patriots again had the better record going into the Super Bowl, but lost to the Giants a second time. Clearly, the team with the better record does not always win the biggest game of the year. The Eagles may have the grit to overtake the Patriots and will give it their all to do so.

Both of these teams have played superb football all season long and there are many reasons why one will defeat the other. If Brady and the Patriots win, they will tie the Pittsburgh Steelers for most Super Bowl wins with six. If the Eagles upset the Pats, they will be bringing home their first NFL championship to their city and have the bragging rights of defeating the great Tom Brady.

Categories
FootballSports
Back to Top