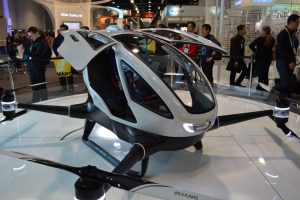 The Ehang 184 personal flight drone was on display at CES. Photo: technobezz

Last month in Las Vegas, tech companies from all over the globe unveiled and displayed their newest gadgets and software at the 2018 Consumer Electronics Show. A year after virtual reality took the electronics business by storm with the introduction of Oculus Rift and HTC Vive, CES had a mellower year, one showcasing improvements to existing tech products instead of the groundbreaking science-fiction level devices announced last year.

That mid-January weekend was dominated by competition between Google’s Assistant and Amazon’s Alexa. The two tech giants have poured capital into their creations, trying to push the other out of the market in which they gather valuable data from human speech. Both companies ask creators of smart in-home products such as light dimmers, ovens and refrigerators to make those products compatible with their respective voice assistants. This is the newest chapter in the struggle for powerful voice recognition and response.

One overlooked and buyable product is the Spire. Spire is a new take on wearable activity trackers. Instead of smart clothing that can detect your activity or the more common wrist tracker, the Spire is a small tag that can attach to any piece of clothing. It uses its small accelerometer and heart-rate sensors to detect exercise and stress. Then it can use Bluetooth to send the data to the various health apps on smartphones. The product will be released in March for $50 retail.

Another unglamorous but practical item is the 3M Filtrete Smart Air Filter. It is the first smart HVAC filter. It addresses two issues: people tend to replace their filters too infrequently and breathe in needless filth, or they replace the filter too soon, before it has run out of its cleaning ability. The Filtrete Smart Air Filter detects the air flow and monitors its own productivity and cleanliness, so when it is time to replace itself the Bluetooth-connected app alerts the owner. It hits the markets this spring at around $22. Although it costs more than non-smart filters, the small uptick in cost will will not outweigh the substantial efficiency improvement.

The event had an undertone of concern due to the questions of security in home devices and software. Spectre and Meltdown are the most notorious of the security vulnerabilities in computer chips. These drastic flaws affect almost all computer chips manufactured over the past 20 years.

Intel’s CEO and leader of the largest microprocessor manufacturer, Brian Krzanich, gave a keynote speech at CES. He understated the borderline catastrophic effects of these security failures. “The primary focus has been to keep customers’ data safe. We’re working tirelessly to stay that way,” said Krzanich when addressing security issues in millions of computer and smartphones. The issue arises when the computer accesses data without permission from the user to increase the speed, and Krzanich claims that  software updates will soon be available to address the concerns.