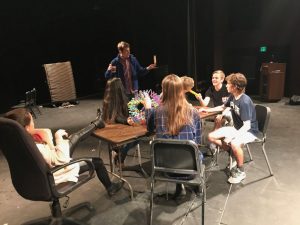 The seniors in the Winter Showcase take a break in between rehearsing their scenes.
Photo: Paige Demba

January is a frenzied month to start the new semester with the craziness of Spirit Week, minimesters, spring sports, and last, but certainly not least, the Winter Showcase, which involves over 50 upper school students.

The Winter Showcase is a unique theatre production where the audience members are taken on a journey with the actors – literally and physically – as they progress with them through various scenes. Instead of the scenes taking place exclusively on the stage in the Fine Arts Center, they will also be in the FAC lobby, band room, chorus room and backstage. The very last location is the main stage in the FAC where the seniors will perform their scene.

Also contrary to most productions, the actors will perform their scenes four times during one night. “Each audience brings a different energy to the room,” said upper school drama teacher Sean Bryan. “One of the main points of this activity is so that the student-actors can learn how to do their scene with different types of audiences.”

The scenes range from five to ten minutes, and some are written and directed by the students. “It’s a student-run showcase of our work,” said Mr. Bryan. “I oversee it, but it’s mainly the students who get to do what they want to do.”

There isn’t a main theme that all of the scenes fall under, but Mr. Bryan does interview the playwrights and the directors, and asks them questions to determine what they want to do so that he can create a sort of matrix to connect everything. “It should really center around what the students want to present,” said Mr. Bryan. “My philosophy behind theatre is not to do museum pieces that everyone should pay reverence to, but pieces that audiences need to see. We have to speak from our heart.”

Junior Annabelle Critz is one of the student-directors, and she is adapting a screenplay for this year’s Winter Showcase. “Writing and directing is much harder than acting because you are all parts of the scene,” said Critz. “When you’re an actor, you only ever have to work on yourself and other actors around you.” When she talks about all parts of the scene, she means that directors have to be aware of all the actors, the set, the costumes, the lights and the sounds. “The director manages every little piece of what the audience sees,” said Critz.

Her scene is a modern adaptation of the 1950s movie “How to Marry a Millionaire.” In Critz’s adaptation, a group of three girls led by the character Schatze (played by junior Margaret Bethel), con their way into renting a fancy apartment in hopes of attracting a billionaire. By marrying billionaires, these girls think that all of their troubles will go away.

Senior Paige Demba is directing a scene called “Controlling Interest” that includes all of the seniors as actors. This scene was selected by Mr. Bryan, and it tells the story of how four eight-year-old boys speak like business executives. These boys are led by Jack, played by senior Cole McCorkle, and they talk about this new idea of liking girls for the first time. They bring in two female representatives to lay down the terms for liking girls, and the boys debate about whether or not they agree with these terms.

The Winter Showcase is on Wednesday, Jan. 24 and Thursday, Jan. 25 at 7 p.m. Tickets are $5 for students and $10 for adults and are available online at https://pace.booktix.com/. Since the audience will travel to different locations for the scenes, tickets will specify whether to start on the stage in the FAC (not in the audience) or in the band room.