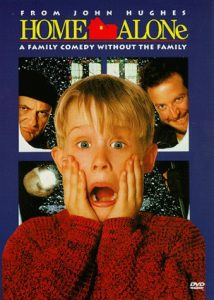 If you end up really enjoying “Home Alone,” then you can watch its fantastic sequel “Home Alone 2.” Photo: s_herman/Flickr

Yards are filled with Christmas decorations, colder temperatures are here, and it’s time to curl up on the couch and enjoy some classic holiday movies. If you’re looking for a kids movie, a romance or a comedy there is certainly a Christmas flick to satisfy your needs.

When people think about Christmas movies, they typically think of the iconic holiday films such as “A Christmas Story” and “Miracle on 34th Street.” The hallmark of all Christmas movies is “It’s a Wonderful Life,” which tells a heartwarming story of a man who is about to commit suicide when an angel visits him to convince him otherwise. A childhood favorite of many is none other than “Home Alone.” The family comedy, where a charismatic boy named Kevin McCallister (played by Macaulay Culkin) is forgotten by his parents in their rush to make a flight and has to protect his home from two clumsy burglars.

Holiday spirit means joy to many, and comedies are perfect for setting the mood. A fan favorite of many alumni and students is “Elf,” which was chosen by the Class of 2016 for their Spirit Week theme. The PG comedy is about a Christmas elf named Buddy (played by Will Ferrell) who leaves the North Pole for New York City to search for his biological father. Ferrell’s captivating and hilarious performance as one of Santa’s helpers makes “Elf” one of the most cherished Christmas movies of the 21st century.

“Scrooged” is another terrific comedy about a cold television executive who is visited by a series of ghosts to reevaluate the wrongdoings of his past. “Jingle All The Way” is a Christmas film about a dad who does some last minute shopping only to find out that the gift he wants for his son is sold out. The film is a hoot, and stars Arnold Schwarzenegger, so what could be better?

Animated movies are the cornerstone of Christmas children’s movies. “The Polar Express” is a fantastic movie that tells the story of a doubting young boy who takes a train up to the North Pole, embarking on a journey that shows that the wonders of life will never fade for those who believe. But a time-tested classic is “A Charlie Brown Christmas,” a sweet 30-minute comedy for any family to enjoy during the holidays.

If you’re looking for a twist, check out “The Nightmare Before Christmas,” which tells the story of Jack Skellington, who brings Christmas to Halloweentown, causing confusion amongst the people in the town. “Rudolph the Red Nose Reindeer” and “How the Grinch Stole Christmas” are the original iconic animated Christmas movies and you certainly cannot miss them. A more recent animated film that has been critically acclaimed is “Arthur Christmas” which answers the question that many kids ask: How does Santa manage to deliver all of his presents in one night?

The holiday season is a much-anticipated break for most students to get away from the pressures of school and relax. After a day of Winter activities and enjoying one’s usual holiday traditions, it’s nice to wind down by enjoying a great holiday movie.