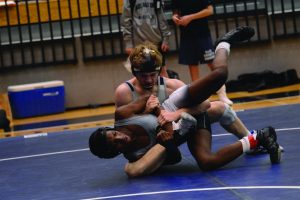 The Pace Academy wrestling team hopes to have the best season they’ve had in years. After beloved head coach Mark Sommerville stepped down from the program, math teacher and Dean of Students Gus Whyte and history and Latin teacher Grady Stevens have taken the reigns of the program. The team has the most wrestlers that the program has seen in several years, with a whopping 22 wrestlers participating.

The varsity team fills 11 of the 14 weight classes, which is a huge step in the right direction. This year’s team has lots of wrestlers between the 138 and 170 lb. weight classes, which is crucial for dual meets where a reserve wrestler may need to fill in at any given moment due to injury or illness. “It is really exciting to have a full room,” said Coach Whyte. “I’m also glad we have some football players joining the team for the heavier weights. It makes everything more competitive.”

Senior Frank Houser is leading the way in practice, dual meets and tournaments with his leadership and passion for the sport. Houser is a three-time state tournament placer, finishing sixth, second and third as a freshman, sophomore and junior. Despite battling several knee injuries and surgeries, Houser aspires to finish his high school career with a state championship ring in the 160 lb. weight class.

Last season, Houser was the sole Knight to advance to the state championship round, but he looks to change that. “I think that every varsity wrestler on our team is capable of making it to sectionals and also state,” said Houser. He has been a captain since his sophomore year and has helped establish a distinct wrestling culture in the upper school.

Senior Ben Thompson returns for his fourth year on varsity, and his second year as a captain. Midway through last season, Coach Sommerville sought a third captain, in addition to Houser and Jonathan Boss ‘17. Although Thompson was splitting time in the varsity 132 lb. class with then-junior Alexander Holmann, Thompson had caught the eye of the entire coaching staff through his work ethic and leadership qualities.

“It was a huge honor to be able to represent such a talented group of guys,” said Thompson. As his second year as a captain, Ben is focusing on being a supportive teammate and a leader. He will compete in the 138 lb. weight class again and work towards finishing the year in the 132 lb. weight class.

Senior Justin Morris tops out the end of the roster, wrestling as a hybrid in both the 220 lb. weight class and the heavy weight. This is Morris’ third season wrestling and he has made exceptional progress, recording over 20 wins in just his junior year. Morris often implements some of the techniques that he has learned playing football. “Transitioning straight from football to wrestling is tough but I enjoy the sport,” he said.

Satisky secured his first win of the season by pinfall two meets later at Lithia Springs High School. “I’d love for them to be excited about the sport and want them to have sound fundamentals and to make steady improvements throughout the year,” said Coach Whyte. “It’s not about wins and losses for them, it’s about developing fundamentals and technique.”

One of biggest tournaments of the year for the team is the 10th annual Prep Slam hosted by Holy Innocents.’ Despite the close proximity to Pace, this tournament is in no way a local battle between Atlanta area rivals. The Prep Slam X is a double elimination tournament and features over 45 private schools, making it the biggest private school tournament in the Southeast. It is not unlikely to have several state champions within a single weight class, and this is where the Knights will see the best competition of the year. Wrestlers will compete Dec. 29-30.

“We purposely have a really hard schedule, so I’m not too concerned about wins and areas,” said Coach Whyte. “Our ultimate goal is geared toward having wrestlers advance to the sectional and state tournaments. All these weekend tournaments have the goal of getting the wrestlers as many matches as they can, because time on the mat versus live competition is key. I want as many wrestlers advancing in the state tournament as possible.”