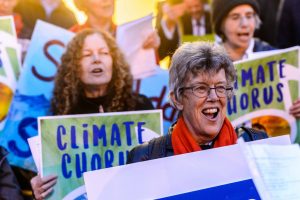 Trump’s destructive stance toward the environment has been met by backlash, particularly from Democrats. Photo: Flickr

Capitalism over conservation: the narrative is centuries old. As a nation, making money has taken precedence over all else – including the health of our environment. Unemployment rates are low. The stock market is high. But, slowly, environmental protection is disappearing from the agenda.

Since October, 25 environmental protection rules have been overturned, 19 rollbacks are in progress, and eight rollbacks are in limbo (The New York Times). The Trump administration is poised to withdraw from the Clean Power Plan. A climate advisory panel meant to survey the health of residents near “mountaintop removal coal mine sites” was disbanded (National Geographic). Trump has revoked Executive Order 13690 which forced federally funded projects to uphold the Federal Flood Risk Management Standard, limiting the risk of future flood damage.

In June, Trump announced that the U.S. would be withdrawing from Paris Climate Agreement – a decision deemed “unethical” by his global peers. The reason? “Trump stated that ‘the Paris accord will undermine the [U.S.] economy’ and ‘puts [the U.S.] at a permanent disadvantage'” (Fox News). Bear in mind, the Paris Climate Agreement is a product of the United Nations Framework Convention on Climate Change. Member nations have pledged to reduce greenhouse gas emissions starting in 2020, but the board began in 2016 to map out preparations. The U.S. cannot legally leave until 2020, but the President’s decision to remove the U.S. has set a precedent for his administration. He is championing “Pittsburgh not Paris.”

There’s an old saying, ignorance is bliss. During the Standing Rock protests last year, the threat of oil leaks was on everybody’s mind, except those of executives at Energy Transfer Partners, the company building the 1,172 mile long Dakota Access Pipeline (DAPL) designed to carry 470,000 barrels of oil a day. The Sioux people in the Standing Rock Reservation in North Dakota fought tirelessly for over seven months, arguing that the pipeline would jeopardize the primary water source for the reservation and damage sacred sites.

Per usual, President Trump sided with the pipeline last January by requesting the company “re-submit [their] application” (Washington Post). Furthermore, President Trump has issued an executive order to expedite environmental reviews of infrastructure projects. This policy would give the President the authority to limit the timespan of environmental review to speed up the process and possibly overlook details. As of June, the project has paused development, yet the dying cry for protective environmental policy is alarming. When will legislators start putting Mother Earth first?

This tale reeks of parallels to the late Dr. Seuss’ “Lorax,” about a community engrossed in the industry of “thneeds” and cutting down their Truffula trees. Just to jog your memory, the town of Thneedville becomes entranced with the thneeds, a posh clothing item designed by a newcomer to town. The young, ambitious mastermind behind the project woos crowds with his powerful words and robust product. But, his economic dreams slowly dissipate as his natural resources (the Truffula trees) become scarce. The skies turn black and the children grow sick, the animals die off and the thneeds run dry. Does the President want his great-great grandchildren to live out a modern-day Lorax?

In this political climate, until money starts growing on trees, conservation will not hold a candle to fossil fuel industries. Officials like Environmental Protection Agency (EPA) administrator Scott Pruitt have joined Trump’s thneed-like initiative to help roll back and prevent environmental protection legislation. Pruitt has counseled the President or assisted in blocking an estimated 30 environmental rules (The New York Times). The EPA as a whole has been criticized for its lack of enforcement of environmental laws and controversial allegiance to the President (National Geographic). But when the skies are clouded with smog and the natural resources scarce, will business save the day?

The headline on Pace Academy’s Isdell Center for Global Leadership’s Conservation page on the school’s website is a quote by Theodore Roosevelt: “We have fallen heirs to the most glorious heritage a people ever received, and each one must do his part if we wish to show that the nation is worthy of its good fortune.” Trump is not doing his part. As one of the leading nations, America is supposed to set the global standard across all fields. If Trump truly wishes to achieve “greatness,” he will look towards the future, not the past. Being “great again” entails building on one’s successes and learning from one’s mistakes. Standing Rock was a victory but, since then, we have witnessed legislative failure.