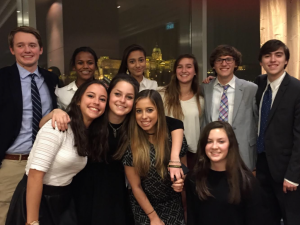 The students gather after the last conference of the trip. Photo: Carter Ferguson

While most Pace students were spending their Thanksgiving break eating turkey and hanging out with family and friends, a group of Pace students were in Budapest, Hungary Nov. 17-26 at the annual Model United Nations (Model UN) conference. On Thanksgiving night, the students dined at the New York Café. “The dinner wasn’t very traditional, but it was still nice to have Thanksgiving all the way in Hungary,” said junior Carter Ferguson.

History teacher Helen Smith chaperoned the Thanksgiving break Model UN trip for the sixth time, along with Associate Director of College Counseling Jonathan Ferrell. Ms. Smith’s first MUN Thanksgiving trip was to Prague, and the last five have been to Budapest. Ms. Smith especially likes the European Model of the Budapest conference, because it encourages and allows even the quiet students to talk and participate with other students.

Mr. Ferrell traveled to Budapest last year for the Model UN conference, but this was his first time going with Pace. “[The trip] was better the second time around, meaning I was much more familiar with the place and the model,” said Mr. Ferrell. “I had a really great time. I thought the students that went were really good, really energized and excited about the model, and I love that we go early enough so we can do the Budapest sightseeing.” The students also had a blast on the trip. “If I weren’t a senior, I would go back to Budapest,” said Satisky.

Students from all around the world are involved in Model UN, and the conference brought this diverse group together. The students were all assigned a topic to research from the point of view of a certain country or minister, and then they prepared a paper addressing the issue from that point of view. At the conference, they met with a committee of other students to debate with one another and work together to attempt to formulate solutions.

Husk recounted one of the most controversial debates he participated in. Harrison’s committee specifically addressed the issue of Macedonia’s bid to join NATO. “My committee decided to bomb Russia, China, Albania and South Korea as a solution to international problems,” said Husk. “Aside from Model UN, though, I really enjoyed getting to visit different museums and monuments in Budapest.”

According to Husk, some of the most interesting sites the students visited were a graveyard of old Soviet statues and the ancient Roman baths. Other students enjoyed visiting a historically-rich Holocaust museum and synagogue in the area that was the Jewish ghetto in Hungary.

Johnson was especially moved to see the memorial called Shoes on the Danube Bank, which was constructed by film director Can Togay and sculptor Gyula Pauer. The memorial features shoes on the bank of the river and honors the Jews who were shot by militiamen of the Hungarian national socialist group, called the Arrow Cross Party, during World War II. After the soldiers demanded that the people remove their shoes, the people were shot so that their bodies would fall into the river.

Ferguson, Johnson, Shippen and Vaneri, along with Mr. Ferrell, all returned from the trip a day after the rest of the group due to a flight cancellation, after spending the night in Paris. At first the group was really upset. “The night went from all of us crying in the airport to the best night of our lives on the Eiffel Tower,” said Johnson. While the juniors were unable to attend the Pre-Debutante Cotillion (PDC) dance due to the delay, Johnson said some of them referred to the night as the “Paris Debutante Cotillion.”