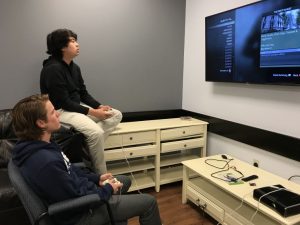 “Senioritis” is the plague that infects high school seniors by slowly taking away their drive to study and finish schoolwork. It often hits during the spring semester when students finish their college applications. A number of seniors, however, have already decided which colleges they are going to by winter break.

Some seniors have shown symptoms of senioritis since October. “My schedule this year is easier than my schedule last year because I actually got to pick the classes I wanted to take,” said senior Marc Mitchell. “And I already pretty much know where I’m going to college.” After stressing out for three years to get acceptable grades for college, seniors like Mitchell are finally getting the chance to relax for a moment after working hard to be a well-rounded student.

After a year as important as junior year of high school, seniors are in dire need of a break from the constant studying for their classes as well as standardized testing. “Being one of the older students, I feel superior over the younger students who stress out about things that are so trivial because I’ve realized those things aren’t worth stressing out over,” said senior Elizabeth Marr. Her realization has proven to be more common among the senior class. Freshmen get anxious when they receive anything below a B on something as small as a reading quiz, but seniors tend not to stress over grades like that because they’ve realized that one grade will not change their entire GPA.

However, senioritis may not be as widespread as some people imagine it to be. “From my position in the college office, I usually see a handful of students who have senioritis, and those are the ones who got into college really early,” said college counselor Amy Secor. “The students who don’t have senioritis don’t have it because some of them picked their classes for certain teachers, and they want to keep working hard for those teachers.”

A lot of teachers think that senioritis doesn’t exist and that it’s just the students being lazy, but to the students, senioritis is somewhat like a legendary rite of passage. After working hard for three years and completing college applications, a lot of seniors try to slack off because they are finally given the chance to ease off the gas before they’re off to college.

In most cases, though, seniors will say that their senior and final year of high school is much harder than their junior year because they have to keep up with their classes while also managing their stress levels about college admissions.