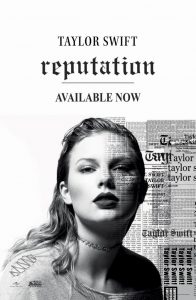 “Reputation” is available to purchase online through iTunes for $13.99. Photo: Moxie

For roughly a decade, 27-year-old 10-time Grammy winner Taylor Swift has been an iconic musician, rising to the top of music charts and only the second solo female artist to win Grammys for Album of the Year twice (in 2010 for “Fearless” and 2015 for “1989”). As her career progressed, she transformed from a country artist into a modern pop musician.

Up until 2017, her lyrics revolved around her vulnerability after a breakup. Her sixth studio album, “Reputation,” was released on Nov. 10, surprising fans with its content. Instead of focusing on heartbreak and weakness, her new songs represent strength and rejuvenation.

Swift’s first released song, “Look What You Made Me Do,” was briefly No. 1 on the Billboard music charts after its release. The song conveyed Swift’s new identity with strong lyrics and a controversial title. It seems as though Swift’s intention with this song was not to please her audience, but to create a turning point in her career, changing her critics’ perceptions of her.

Over the past years, Swift has been involved in celebrity drama with famous people such as Katy Perry and Kanye West which caused her to speak out. This has created a group of “haters” who bash on her personality and talent. With this new album, Taylor appears to convey to her audience that she has changed and does not care what the critics think of her. “I think it was extremely smart of Taylor to release this song first,” said junior Devan Johnson. “It left such an impression on all its listeners and provided amazing publicity for the upcoming album.”

Her second released song, “…Ready for It?” perfectly enticed and prepared its listeners for Swift’s upcoming album. She starts with typical pop song verses and then unleashes into an intense chorus. It seems as though her intent was to challenge her audience with the rhetorical question for a title. It is almost as if she is warning her audience that her new album will be controversial and unique and they need to be prepared.

“Gorgeous” and “Call It What You Want” were the third and fourth released songs before the album. They are what one might consider a more typical pop song. Here, Swift dropped the tough girl act and released songs her fans could relate to and love. “I love these two songs,” said junior Avi Arora. “They made me so excited for the album and the suspense was killing me. I’m so glad it has been released.”

One of the most popular songs released on the same date as the album is “End Game.” It features both Ed Sheeran and Future, two of the most popular musicians this past year. It touches on so many aspects of music, which allows it to appeal to many different types of audiences. “Whether you enjoy rap, chill pop, or upbeat pop, this is the song for you.” said sophomore Jordan Upchurch. “Reputation” is now available for purchase on iTunes. The full album is $13.99.