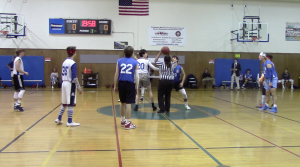 The Pace varsity basketball team is already several games into their season. But for those non-varsity players who love the game, the highly competitive Peachtree Road United Methodist Church (PRUMC) basketball league provides an opportunity for athletes to hit the court.

Over the years, the popularity of this alternative basketball league has grown exponentially, with the number of Pace teams joining the league also increasing. The laid-back atmosphere of the league is great for those who are also engaged in a winter sport and want a fun experience. The effervescent trash talk, pre-game prayers and rollicking outfits are rituals for those who take the game extremely seriously.

The aspect of a self-coached league allows teams to create  an identity for themselves only suited for the unique competition in the PRUMC environment. This year, the famed court is home to four Pace teams: one senior team, two junior teams and one freshman team. Last year, a highly anticipated, nail-biting game between the junior “Wet Boiz” and the newly named “Stevie Wonderdogs” ended in a Wonderdogs victory with a final score of 39-37.

The two competitive teams are continuing the beef this year with team members already throwing shots at each other. “Honestly, the Wet Boiz are an embarrassment,” said Wonderdogs coach Andrew Konradt. “Their uniforms are lackluster and their coach has no drive.” Wet Boiz team member Chase Karamanolis responded with, “Stevie Wonderdogs gonna get worked this year.” Both teams have key players that can turn the season in their favor. Players like three point specialist Tase Karamanolis for the Wet Boiz and all-around superstar Lane Goldman for the Wonderdogs will be essential to their teams’ success.

The intense competition between these two church league teams has also attracted a growing number of fans that partake in the beef. “The Wet Boiz should play more afternoon games because their coach only comes out at night,” said junior Madeline Janki. Last year’s matchup drew over 40 Pace students as well as junior dean Erica Barbakow in support of the game. The Wet Boiz and the Stevie Wonderdogs will continue the rivalry tradition on Feb. 28 in the heart of PRUMC season in what is sure to be an exhilarating game.