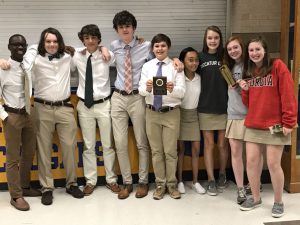 Shuffling their papers and assembling their speaking points, the Pace Academy debate team prepares for their next tournament. Having traveled to Chicago and Ann Arbor already this year, the team’s time commitment and dedication to debate is huge. Coached by J. B. Fuqua Chair of Speech and Debate Shuntá Jordan, the team has the guidance and talent needed to succeed this season.

Coach Jordan has always had a passion for coaching sports such as basketball and never expected to become a debate coach. “Debate is something I kind of fell into and have been doing ever since,” said Coach Jordan. She has personal experience as a debater in high school and college. “The fact that I competed helps me relay the importance and evolution of argumentation in debate to my current team,” she said. She has coached debate at Pace since 2003.

Tournaments require hours of preparation and review of both negative and affirmative arguments for different topics. The team is broken into pairs that compete in each round and is further divided into varsity and novice teams. Varsity debaters including juniors Ben Nottingham and Tyler Henderson have brought home several victories for Pace and are currently ranked No. 22 in the nation.

The amount of time that students dedicate to debate is enormous. Why participate in such a difficult and time-consuming activity? Despite the load of work, hours and background knowledge required, the Pace debate team has found that they are now able to understand the controversial issues of today and why people take certain stances.

“I wanted to learn communication skills and be able to further my knowledge of present day issues,” said junior Kirk Spinelli. Even Coach Jordan finds that the skills she has learned through debate are useful in her everyday life. “I’d say that debate gave me the confidence to express my views in front of others and not be intimidated,” said Coach Jordan. “Debate helped me develop critical thinking skills that are essential in everything that you do.”