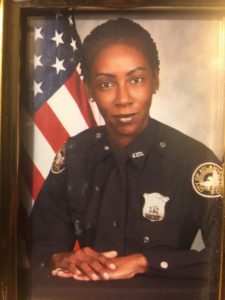 Officer Tillman is recovering from her injuries and plans to be back soon. Photo: Melody Tillman

Officer Melody Tillman has been a familiar figure at Pace Academy for many years. She has consistently directed traffic coming in and out of the school every day. But on the morning of Nov. 2, the unsuspecting officer had just begun to direct traffic when she was struck by a car speeding down the turn lane on West Paces Ferry Rd.

She was transported to Grady Hospital, which specializes in treating traumatic injuries, where she remained until she was released. Officer Tillman was treated for four broken vertebrae, a broken kneecap and a concussion. Head of School Fred Assaf communicated in an email to Pace faculty and staff that “given the severity of what happened, it [was] miraculous that she [was] in the condition she [was] in.”

Officer Tillman is known to the Pace community as helping smooth the tension and stress of getting in and out of school. However, to some, she is much more than just a cop.

Officer Tillman was born in Jackson, Mississippi and went to the University of Mississippi before getting her Master’s degree from Mississippi State. She was in the workforce for 13 years before coming to Pace, where she has worked for seven years. She started as a drug enforcement agent with the Atlanta Police Department before switching to crime analysis where she’s worked for two and a half years. “Even growing up I always knew I wanted to be a cop,” said Officer Tillman. “It always had something about it that was appealing to me.” She is also a mother of two sons, one who is 19 and in the workforce as well as an 11-year-old who is a middle schooler.

Officer Tillman has left her mark on many Pace families, including Mr. Assaf and his family. “I feel like I have gotten to know her really well, and she has gotten to watch my own children grow up,” said Mr. Assaf. “She greets me every day with a smile as I come onto campus.” Mr. Assaf kept the Pace community informed after Officer Tillman’s accident and began a fund to help Officer Tillman and her family while she recovers from her injuries. According to Mr. Assaf, over 50 families contributed to the fund within the first hour.

“I am absolutely overwhelmed with the outpouring of support from Pace families,” said Officer Tillman. “It seems like every single week someone has dropped me off food, or a gift card for food, or something that just makes my life so much easier, whatever it is. I am very lucky and grateful for the great families that have helped me so much.”

Almost immediately after Officer Tillman was struck, teachers as well as police officers rushed to her aid. Even while at Grady Hospital, the Atlanta Police Department had a police officer stationed to stay with her around the clock.

“I thought the way that everyone rallied around her and helped in any way they could was heartwarming,” said math teacher and freshman dean Krista Wilhelmsen. “Even her fellow officers came to her aid, using a police escort to help her ambulance get to the hospital. At a time when so much of our focus is on the negative, it’s awesome to see the beauty of what people can do for someone, and it helps us believe that there is still good in the world.”

Officer Tillman and Pace students have a very friendly relationship, and even though she is not certain when she’ll be able to return, she is eager to get back to work at Pace. “Pace does so much for me,” she said. “Even though it is an extra job for police officers, it is very welcoming. Most extra jobs are just on the weekend, but Pace allows you to come every day. Pace is my baby, and I cannot wait to be back.”