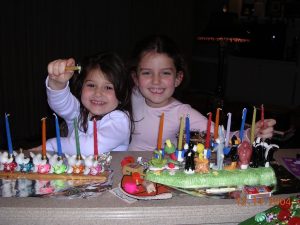 First semester is about to end, which means holiday season is right around the corner. Mariah Carey’s “All I Want for Christmas” is playing on the radio and people have begun to deck the halls, but before Christmas comes Hanukkah, the famous Jewish holiday parallel. Gifts are exchanged for the eight-day period as the chanukiah, or menorah, is lit to signify the “festival of lights.”

The holiday commemorates the rededication of the Temple in Jerusalem after the Maccabean Jews drove out the forces of Antiochus IV Epiphanes. The Maccabees had only enough oil for the menorah to burn for one night, but miraculously, it lasted for eight. Although this holiday is celebrated among many Jews around the word, everyone celebrates it differently.

“Every night we will light all of the chanukiahs that we made in preschool,” said junior Kayla Ross. “Since we have four children in our family, our whole house will be lit up with at least 15 cute menorahs. They’re all terribly made and funny to look at so we all look forward to lighting them all up.” Each chanukiah has 9 branches, or candle holders. Eight of them represent the eight days that the oil burned, and the ninth candle, the Shamash, is the helper candle.

Along with the chanukiah tradition are latkes. “My family loves to play dreidel, eat gelt and make latkes,” said sophomore Jeremy Leven. The signature fried potato pancakes, however, are a favorite among many people, not only Jews. “I love latkes so much,” said junior Jenny Luetters. “Every time I go to Goldberg’s, even if it’s not holiday season, I make sure to order some latkes.”

Some families even infuse some Christmas traditions. “Sometimes my whole family will have a Hanukkah version of secret Santa,” said senior Jordan Shoulberg. “We will exchange cute gifts and always have such a fun time together. Other than that my immediate family will just light the candles every night and say the prayers.”

Some families even celebrate both Hanukkah and Christmas. “My mom is Jewish and my dad is Christian so I’m really lucky when it comes to the presents,” said senior Caroline MacRae. “I love to play dreidel and eat latkes with my family, but I also love to decorate the Christmas tree.”

Although many people believe that Hanukkah is the most religious day of the year for the Jews, it is not. Some families pay more attention to holidays like Passover. “My family doesn’t have a lot of traditions on Hanukkah,” said freshman Sloan Baker. “We usually just sit around the table and open all of our eight gifts in one night instead of doing one per night.”

When people hear the word Hanukkah, they immediately think dreidel, chocolate gelt and latkes, but every family has a different set of values and different traditions. “I look forward to Hanukkah every year just because I love our family traditions,” said sophomore Jay Satisky. “My favorite thing about Hanukkah is obviously the presents, but I also love every other tradition that my family does.”

Because Hanukkah follows the Hebrew calendar, the dates vary from year to year. This year, Hanukkah is Dec. 12-20.