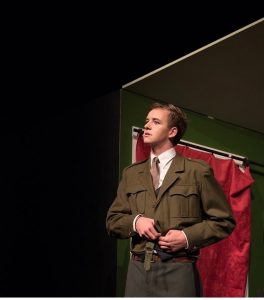 KN: How has the transition been from middle school to high school?

JB: It has been pretty hard, but I guess most people have caught on pretty fast.

KN: What do you think has been the hardest part about the transition?

KN: When did you start acting?

JB: In sixth grade. I auditioned for the middle school play.

KN: What did you like the most about being in the One Act?

JB: Um, I liked the small cast. I thought it was a good chance to grow our talents and get better as a team.

KN: What’s your favorite role you have played?

JB: I think it would have to be this role in the One Act. I played Mr. Smirnov who was an angry businessman. It really let me channel myself into this part and sort of let go of everything.

KN: Do you like having your sister (senior Katie Brown) in high school with you?

JB: Yeah, she tells me a lot of what I should do and gives me good advice. We’re really close.

KN: What is your favorite part about Pace?

JB: I would say the teachers. I really like Mrs. Washburn because she is really helpful. She helps everyone understand everything clearly, especially because freshmen don’t have any experience with reading high school level books.

KN: What is your favorite class?

JB: Probably English. I like the “Harknesses” we have. I like how everyone brings their own ideas to the table and we can discuss them.

KN: If you could meet anyone who would it be?

JB: I would meet the singer Troye Sivan. (laughs) I think not only is he a really talented person but I think he also has a lot to say and he would be great to have a conversation with.

KN: Who is the most influential person in your life?

JB: I would say my sister. I guess we have always been really close and I am thankful for everything that she has taught me about high school and life in general.

KN: If you were on a deserted island, what would you bring with you?

JB: A knife and my best friend.

KN: If you could fill a bathtub with one thing what would it be?

KN: If you could go anywhere in the world where would it be?

JB: I want to go to Tokyo, Japan. My dad lived in Japan for two years, and I think it’s a really cool city.

KN: Where do you see yourself in seven years?