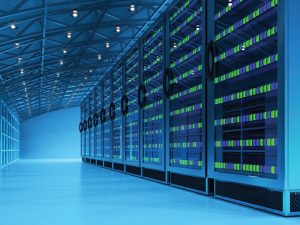 Cloud computing is the practice of using remote servers, sometimes referred to as “data farms,” to process and store information instead of building a local server. Every single Google Doc, Google Sheet, Gmail, and Google Class is seamlessly and effortlessly stored in a faraway server.

By buying a subscription to the Google Cloud service, users have access to extensive benefits. A cloud subscription service is affordable because there is no need for IT experts to use local electricity and maintain local servers. The service is fast and limitless. Vast amounts of computing power can be added with just a few clicks. It offers high performance and is secure with data backup and disaster recovery because the service makes multiple copies of all data on its servers.

Google is not alone in the cloud computing industry. In 2006, Google CEO Eric Schmidt first coined the term, and the field has exploded, with massive competition. The strongest competitor in the field is – to no surprise – Amazon. Amazon Web Services or AWS, accounted for 56% percent of Amazon revenue last year. Businesses often subscribe to AWS for the cheap, scalable and efficient operations that can boost the power of businesses in adding applications, programs and storing data. Software and internet giants including Netflix, Intuit and Juniper have gone “all-in” with AWS, storing their millions of terabytes of data with Amazon.

Cloud computing can be effectively described as a front-end, back-end system. The front end is what the client sees; it is the carefully coded web design aimed for ease of use such as the user interface (UI) of Gmail. The back end is the endless rows of steel boxes filled with circuitry, storage chips and blinking LEDs; they are stored in massive data centers around the world, the largest of which is the 1.1 million square foot Lakeside Technology Center in Chicago. An immense quantity of server systems inside require an 8.5 million gallon refrigerated brine liquid to cool the machines, and 50 generators to power them all. The 100 megawatts the generators produce is enough to power 36,000 homes.

The technological prowess of cloud computing is often discussed, but its impact on everyday life is often overlooked. Socially, the cloud has connected the entire globe through social media such as Facebook and Twitter. Without the cloud, the massively popular Snapchat and other social networks would be impossible.

Educationally, cloud computing has allowed students to access their data from anywhere and has improved educational systems in developing countries in that an internet connection is the only thing needed for in-depth education. It also helps developing countries because by tapping into the cloud they do not need to invest in data infrastructure. Medically, the cloud has made storing and sharing patient data easier and sharing new medical tools and procedures quicker.

There are a few challenges in converting data, companies and applications to the cloud, but the benefits of the cloud for any individual, company or government outweigh any drawbacks. Cloud computing is the data business of the future, and the already enormous industry will continue to grow and transform the world.

Categories
LifestyleSlideshowTechnology
Back to Top