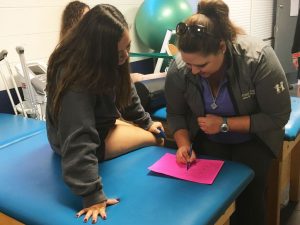 Trainer Ashley Roberts (left) works with junior Regan Bates during her rehabilitation for a torn ACL suffered over the summer. Photo: Michael Simon

Everyone knows that participating in sports can result in injuries. Regardless of the magnitude of an injury, all injuries are serious and must be treated with the proper caution. For most athletes, getting injured is a risk they are willing to take in order to participate in a certain sport.

Struggling with shoulder issues in both shoulders since his freshman year, senior Jonathan Rushton, a Pomona College soccer commit, recently decided to have surgery on his right labrum. By getting surgery, Rushton, who has been a member of the varsity basketball and soccer teams since his freshman year, has ultimately ruled himself out of all Pace sports this year. His rehabilitation will keep him off the court and field until late May.

“One of the hardest parts about my injury is dealing with the school work,” said Rushton. “I missed two days of school because of my surgery and having to make up that work while staying on top of the current work was a hard combination to deal with. It’s also still hard to even write with my sling.”

Lewis is having a different experience given that he will return to action this season. Regardless, he believes the hardest part is the rehabilitation process and making sure that he is ready to go as soon as possible.

Basketball is not the only sport that has seen injured student-athletes this year. Perhaps the most risky sport when it comes to injuries is football. The team saw its fair share of injuries before the season ended on Nov. 10. Halfway through the season, senior linebacker and captain Gavin Guest suffered a broken hand which required surgery, sidelining him for the remainder of the season, including the rivalry game against Lovett.

Female athletes have suffered injuries as well. Junior Regan Bates, a two-year varsity soccer player, tore her anterior cruciate ligament (ACL) over the summer. Bates has been undergoing physical therapy in the Pace training room, and looks to be back in playing condition soon. “My rehab process has been going really smoothly,” said Bates. “My knee is feeling a lot stronger, and I think I’ll be ready for club soccer by January.” Like Bates, freshman cross country runner Laura Romig also tore her ACL during the season, and has since been rehabilitating her knee in the Pace training room.

Injuries can keep athletes sidelined even after they have been cleared to play. After an arduous rehabilitation process, athletes must still readapt to the speed and intensity of practices and games, which can take a few days to a few weeks. “Even when I am cleared to play I won’t be at 100 percent,” said Lewis. “Even after I get cleared it will still be at least a week before I can go full contact.”

That is why the Pace athletic trainers are crucial members of all sports teams. Pace currently has three trainers working in the training room located within the weight room: Ruth Fuqua, Ann Lacklamp and Ashley Roberts. The responsibilities of the trainers vary from athlete to athlete and sport to sport, but the importance of these trainers cannot be overlooked.

Trainers can perform simple tasks such has taping a rolled ankle to more long-lasting tasks like providing rehabilitation workouts for certain injuries. Trainers are oftentimes considered members of whatever sport they are responsible for, as they spend countless hours with the team, both on and off the field and court. For example, last year, Ms. Roberts traveled with the varsity boys basketball team on both of the Winter Break tournaments and also flew to Massachusetts with the team over Martin Luther King, Jr. weekend. Ms. Roberts is also the main trainer for the football team.

“Obviously, the safety of the student-athletes is the most important aspect when it comes to handling different injuries,” said Ms. Roberts. “We make sure that the students are truly healthy and feel confident to get back to action. The worst thing is when athletes try to return too early and end up suffering a worse injury.”