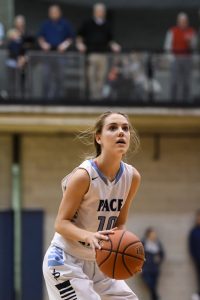 The Varsity girls basketball team is seven games into their regular season and junior Ann Rafeedie has earned her spot as a starter and a leader on the team. “I love playing basketball, it has always been a passion of mine,” said Rafeedie.

Her skills have developed since she started playing at Pace as a freshman. “Her ability to shoot the ball and score are a big help on our team,” said Athletic Director and team head coach Troy Baker. “She has made herself more of an asset on our team by her ability to play defense, being more physical and her ability to box out and maintain possessions. She has evolved into a player who can help our team on both sides of the court.”

The Varsity girls basketball games have become a big attraction at Pace. “Both last year and this year, I have been going to the girls basketball games and there has been one player who has just stood out to me,” said sophomore Davis Futrell. “Every time I get to watch Ann it amazes me how she has such a smooth stroke. It is really special and I love watching her and the rest of the team play.”

Rafeedie is mainly known for her shooting abilities. “The junior-led basketball team is fun to watch,” said junior Andrew Konradt. “Ann Rafeedie really stands out. She makes a lot of threes.”

Not only is Rafeedie a fan favorite and a team leader, she is also a supportive teammate. “Ann has been a great teammate over the past two years and she is a great leader and an impactful player on our team,” said sophomore Virginia Hobbs.

Currently, Rafeedie plays AAU for the Georgia Pistols Elite. She is a starter on the team and plays shooting guard. She has been playing basketball for the majority of her life, and recently, she has begun to think about playing in college, “I am looking to play at Lehigh, Upstate, Furman and Belmont,” said Rafeedie.