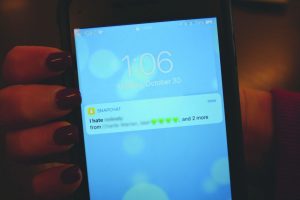 In late October, several white students enrolled in North Springs Charter High School were using a racial slur as their Snapchat group name. This Snapchat was discovered by a student at the North Fulton County high school who turned it in to the school’s administration. Students at North Springs Charter who wished to remain anonymous shared details of the events that followed.

The administration suspended the students involved in the Snapchat group. In order to properly discipline the students, the administration followed protocols outlined in the Fulton County Schools Code of Student Conduct. In addition, Hanson led 30-minute assemblies with each grade separately in order to address the issue. This was an attempt to improve the school as a whole and settle racial conflicts.

Many of the suspended students’ families threatened to sue North Springs Charter High School for unfairly punishing their children. This predicament occurred during the financial crisis affecting all Fulton County public schools. The Georgia Department of Revenue recently rejected Fulton County’s tax digest, so tax revenue to the schools was delayed. Schools were nervous about having to cut back on their spending, so the threat of some families suing this school made the administration even more nervous. The school ended up letting many of the students involved return to school.

Although many of the problems have been resolved at this point for North Springs Charter High School’s administration, this shocking incident was a wake up call to the school that racial issues are present and need to be addressed. It also served as message to all Georgia schools that clear expectations must be set with students before an incident happens, rather than after.

The story made the news on Nov. 3 and quickly caught viewers’ eyes. The story was picked up by three major news networks including the Atlanta Journal-Constitution, WSB-TV 2 Atlanta and FOX 5.