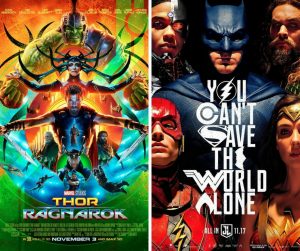 In 2008, Marvel began Phase 3 of their movie franchise with the release of the hit movie, “Iron Man.” With an all-star cast including Robert Downey Jr., Gwyneth Paltrow and Jon Favreau, this movie received a 94% rating on Rotten Tomatoes.

Although Marvel regarded their Phase 3 movie franchise as a huge success, DC also released a hit movie in the same year, “The Dark Knight.” On IMDB’s list of “Top 250 Movies of All Time,” “The Dark Knight” is rated No. 3. “The Dark Knight” also includes a tremendous cast of Christian Bale, Michael Caine, Morgan Freeman and the late Heath Ledger in a standout performance as the Joker. The movie also earned a 94% on Rotten Tomatoes. But after “The Dark Knight,” DC went on to make some bad movies while Marvel made movies that broke box office records.

The ongoing rivalry was once again put to the test with the release of “Thor: Ragnarok” and “Justice League.” “In the past few years, Marvel movies have been so much better than DC movies,” said freshman Noah Levenson. “Based on the trailers, and the research that I have been doing, there is no doubt that “Thor: Ragnarok” will be a better movie than “Justice League.’” “Thor: Ragnarok” has a cast of Chris Hemsworth, Tessa Thompson, Tom Hiddleston, Jeff Goldblum and Mark Ruffalo.

“Although Marvel movies have been better in the past few years, I feel like “Justice League” could be the turning point for DC and this is the start of some awesome DC movies,” said sophomore Thomas Siegenthaler. “Justice League” has an awesome cast of Ben Affleck, Gal Gadot, Henry Cavill, Jason Mamoa, Ezra Miller, Ray Fisher, JK Simmons and Amy Adams.

After seeing both action packed movies, with deep consideration and review, this writer believes that “Thor: Ragnarok” won this battle.