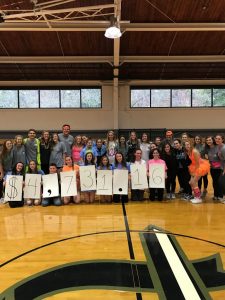 The Miracle Network Dance Marathon is an annual fundraising program involving students in colleges and high schools throughout the United States. A local dance marathon, lasting anywhere between eight and 40 hours, concludes the year of fundraising and brings children and families from nearby pediatric hospitals to dance and interact with the students.

“[Partnering with UGA] was honestly amazing because we did not know what to expect,” said Wagoner. “Miracle Knights is a first-year program so I think we still need some help getting more people involved and excited. Next year we are trying to get the whole student body involved with year-round fundraising.”

Tyler, a patient of Children’s Healthcare of Atlanta (CHOA), came with his mother to Miracle Knights to share his story. He was diagnosed with bone cancer when his arm was hit by a soccer ball, and he shared the impact his illness still has on his family. “Tyler’s mom told us how much [dance marathon] means to them and to the other families at CHOA,” said Wagoner. “Even though Tyler is not a normal kid, he got to feel normal for four hours while dancing with people who care about him. That’s why we do this, for children just like Tyler.”

The Pace community raised a total of $4,851.16. “This was just enough to fund a chemo session for a child who cannot afford it,” said Wagoner. “This is truly amazing for a first year program.” Money raised through the Miracle Network supports children in 170 different hospitals across the country. According to the Miracle Network, they “are the only children’s charity committed to having 100% of the funds raised stay local to support local kids.”

“It was so incredible that we raised so much money in the first year of the program,” said Satisky. “But it was even more special to meet a child that, as a result of the dance marathon, is alive and healthy.”