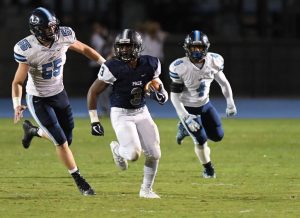 This past Friday marked the end of another football season, one that had its ups and downs. Following a first round state playoff loss to the Calhoun Yellow Jackets 24-3, the Knights ended their season just below .500, with a record of 5-6. While the score sounds rather lopsided, the Knights fought hard to the last whistle and were unfortunately on the wrong end of close calls and controversial penalties.

Highlights from the season include a dominating 59-3 victory over Stone Mountain, but the best moment was the second half comeback win over Lovett, 17-14. After being down 14-3 at halftime, the Knights persevered and battled back to steal a win from their arch rivals. “The Lovett game was by far the best game of the year,” said sophomore player Christopher Morocco. “The locker room afterwards was the most hype I have ever seen it.”

The Knights look to return to the playoffs next year, and hopefully will be able to make another run at a championship. This year’s seniors will be missed, with nine set to graduate, and all nine contributing strongly to the team. However, the class of 2019 seems eager to take on more responsibility. The Knights will return 13 starters, including quarterback Jared Rayman and running back Keashawn Perryman, both current juniors, as they look to build momentum and chemistry over the offseason.

“We will look to fix our mistakes and improve our areas of weakness,” said junior Sam Assaf. “This loss will be a driving factor as we dive into next season; we don’t want to feel this way again. We won the state championship as freshmen, and we will do everything we can to win it as seniors.” As the Knights fight for another shot at a championship, they plan to grind over the offseason in order to put themselves in the best possible position to win.