Water Polo Ends Season in Second Round at State 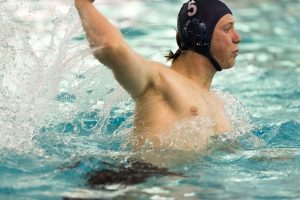 The Pace water polo season had a fantastic run this year. “For the third time in program history, they finished with 10 wins,” said head coach John Ague. With an overall record of 10-7, the team made it to the second round in the state tournament before their defeat by Forsyth.

According to Coach Ague, Jenkins is the career leader for goals scored, with 256 goals scored in three years. This year Jenkins scored 138 goals and had 14 assists in only 17 games. Harris broke Drose’s record of 40 assists for the season with 46.  Harris moves to number two in career assists with 54 and Drose is third with 49.

“We have a lot to look forward to for the next year, as we are losing just one player to graduation,” said Coach Ague. “With a stacked roster and a team that can drastically improve, I am excited for the future of this team.”