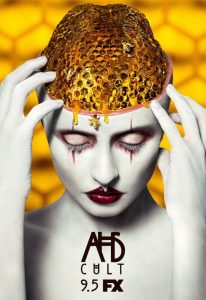 “American Horror Story” is known for its bizarre, gruesome and efficacious stories intended to scare and entertain its audiences. ‘”Cult,” the seventh and newest season of “American Horror Story,” embodies all of these qualities, but also touches on other important aspects. In the new season, producers Brad Falchuk and Ryan Murphy perfectly pinpoint current societal issues in America in an exaggerated, horrific way. It tackles the topics of Donald Trump’s election, discrimination by both citizens and the police force, and terrorism with an overall theme of American fear.

“Cult” is set in a fictional city called Brookfield Heights, Michigan. Ivy and Ally Mayfair-Richards are a married gay couple with a son named Oz. After the election of Donald Trump in 2016, Ally’s phobias that she has been struggling with her whole life begin to quickly escalate. Her phobias include coulrophobia (fear of clowns), haemophobia (fear of blood) and trypophobia (fear of irregular arrangement of small holes or bumps). She feels as if she has no control and the world is going crazy. Ally is a minority because she is both a woman and gay. Her reaction to the election, although more extreme, represents the reactions of many Americans in a similar situation.

Not only does the season touch on minorities such as gay women, but also immigration. After the election, Ally and Ivy’s nanny quits and disappears in fear of being deported. There is another scene where a police officer blames a crime on an innocent Hispanic man who was born in the United States. “Many of the scenes represent issues happening in our society,” said junior Bay Brickley. “The police have been accused of racial profiling for many years and the fear of being deported after the election for illegal immigrants has definitely risen.”

A man named Kai Anderson starts to take advantage of the people’s fear in order to win an election and become a member of the City Council. Kai forms a cult to terrorize the town. He later uses this fear he created as leverage and the main point in his debate. These are radical people who believe this is the only way to remake government the way they want.

On top of all these representations of society, the season takes a couple of direct hits at Donald Trump and his supporters. One supporter is seen sexually assaulting another woman because she is gay and many others are depicted as racist homophobes like the character Kai. It shows how Donald Trump’s actions may have influenced Americans around the country. This season depicts the extreme sides of both Donald Trump supporters and those who oppose him.

The cast includes returning actors and actresses Chaz Bono as Gary Longstreet, Cooper Dodson as Ozymandias “Oz” Mayfair-Richards, Colton Haynes as Detective Jack Samuels, Leslie Grossman as Meadow Wilton, James Morosini as R.J., Dermot Mulroney as Bob Thompson and Adina Porter as Beverly Hope. Overall, the cast is incredible at acting and conveying the storyline. They are able to create creepy and effective characters that perfectly capture the story being told.

The special effects are gruesome and bloody, leaving the audience cringing and shutting their eyes in satisfying disgust. “The Cult” is full of mystery, with every episode revealing a new and astounding discovery no one would expect, causing the audience to be in shock and utter astonishment. “American Horror Story” continues to be a smashing hit with those who yearn for mysterious and mind boggling stories.