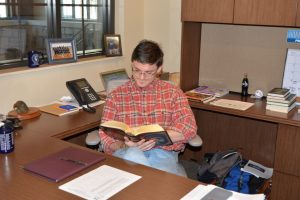 Mr. Stevens indulges in a book during his free period. Photo: Zachary Howard

With the Thanksgiving holiday fast approaching, students will have some free time on their hands. One activity many students enjoy, and a pastime teachers recommend time and again, is reading. A few teachers shared some of their favorite books and why the books resonated with them.

Tenth grade history teacher Caitlin Terry recommends her favorite book, “Watership Down” by Richard Adams. The book is an epic, much like Homer’s “The Iliad” or “The Odyssey,” but it is centered around non human characters, like rabbits, and is set in England. “I return to it again and again because not only is it a journey, and I like stories about journeys and quests, but also the language is very poetic,” said Mrs. Terry. “For example, the way he talks about nature creates a peaceful scene or setting in my mind. It’s a story about courage and bravery even when things seem to be lost, and overall, I think it’s an interesting way of dealing with both life and death.”

History and Latin teacher and Class of 2020 Dean Grady Stevens has a similar book that he calls his favorite. He enjoys reading “The Iliad” and “The Odyssey.” “The reason they are my favorite books is because they are epic in scale, literally, and the subjects that they contain cover all of human existence,” said Mr. Stevens. “’The Odyssey’ and ‘The Iliad’ really cover the biggest themes, which any epic poem should.” “The Iliad” is about man’s place in war and “The Odyssey” is about man’s place in the universe, and there are journeys through these experiences. While most read “The Odyssey” in ninth grade, both books are still a good read and very important in understanding the world today, according to Mr. Stevens.

Tenth grade English teacher Don DuPree says that his favorite book is “The Magus” by John Fowles. “It’s a fascinating story about a man who unwillingly finds himself teaching English on a Greek island populated by an English boarding school and an eccentric billionaire. So during the week, he’s teaching school and acting like any other teacher, but on the weekends he is exploring this billionaire’s world that may or may not exist,” said Dr. DuPree.

History Department Chair Tim Hornor recommends “Plato’s Republic.” “Its an interesting book because I disagree with it on some of its major points,” he said. “But some of its observations of democracy, I think [Plato] was able to criticize in a way that was both elegant and thoughtful.” Mr. Hornor stresses the importance of the book. “You’re having a conversation with someone who was living 2500 years ago, and that’s what makes the book great,” he said. “Name a book that is written today that in 2500 years people will still be reading. I can’t think of one, but I guarantee you that 2500 years in the future people will still be talking about “Plato’s Republic.”

English teacher Emily Washburn offers a different recommendation: “Beloved” by Tony Morrison. According to Mrs. Washburn, the novel is “a beautifully written ghost story.” “Beloved” traces a family of former slaves right after the Civil War. As Mrs. Washburn said, the book is a “story about the long-term effects of slavery,” addressing how the practice of slavery continued to affect people long after it was abolished. For that reason, she says, “‘Beloved” is relevant to our national conversation about race.”

Head of Upper School Mike Gannon’s favorite is “A Prayer for Owen Meany” by John Irving. The novel, which was published in 1989, appeals to him in many ways. “The writer is not just a great author but also a great story teller, and that makes the story great,” he said. “The way Irving develops the characters throughout the book makes for a very interesting story.”