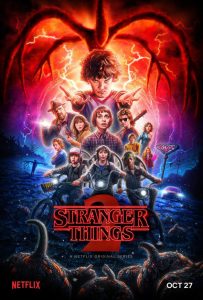 The updated cast of the newest season of Stranger Things. Photo: Netflix

After much anticipation, “Stranger Things 2” is finally here. If you are like me, you have already binge-watched the entire second season of the sci-fi thriller. With its release just days before All Hallow’s Eve, the timing could not have been more perfect to match the heightened spookiness that we see in this new season. While it plays out on a much larger scale, with bigger and badder threats, it is still grounded in the reality of the ’80s.

This season introduces several new characters that build and expand on the small town of Hawkins. In addition to new characters like Max, Bob, Doctor Owens and Billy being brought to the town of Hawkins, new antagonists like the mind flayer and demidogs are introduced into the alternate dimension of the upside down. We can also see the development of characters from the original season to fit bigger roles in the new season. The most evident examples can be seen in Steve as he becomes a form of babysitter to the party of boys, and Chief Jim Hopper as he evolves into a father figure.

Compared to the realistic, normal feel of the first season, this season greatly expands the universe the Duffer brothers have created. While the first season sees the upside down as a place that is cut off from the real world that no one can fully comprehend, this season we can see that the upside down is a living organism, and a force to be reckoned with. As well as the development of the upside down, we also dive into the origin behind the number on Eleven’s wrist. With cliff hangers at the end of each episode, it’s hard not to binge.