Pace Faculty To Run in Thanksgiving Half Marathon 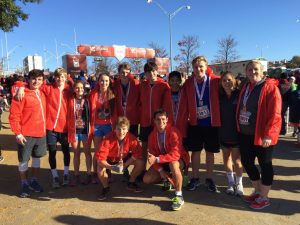 On Thanksgiving Day, many runners in Atlanta will participate in the Half Marathon hosted by the Atlanta Track Club. The race begins at the Georgia State Stadium, the former Braves stadium, and will take runners along the streets of the city, hitting famous spots such as Centennial Olympic Park, Atlantic Station, Piedmont Park and Oakland Cemetery. Members of our Pace faculty, Dean of Students and math teacher Gus Whyte and science teacher Melody Walter, plan to participate in this exciting event that will certainly justify eating turkey on Thanksgiving night.

Both Mr. Whyte and Dr. Walter have run half marathons before. “I really like signing up for races like triathlons or half marathons because it helps motivate me to stay in shape and exercise,” said Dr. Walter. In addition, after a hot summer, runners appreciate the cooler temperatures and low humidity. “I love it because the weather is usually good and it is a great way to start Thanksgiving day,” said Mr. Whyte.

A half marathon is 13.1 miles, so it depends on the individual to what extent they prepare, if they decide to prepare at all. The Atlanta Track Club offers training schedules, weekly runs, clinics and workouts; however, many choose to craft their own training schedule to work around their busy lives.

Mr. Whyte said that several years back he ran the half marathon with one of the top cross country runners on the boys team, and they decided to stick to a strict training regimen in order to run it at a competitive pace. “We decided to really train for it, which meant a lot of long runs on weekends and increasing the mileage,” said Mr. Whyte. However, this year he doesn’t think he will do anything differently to train for it other than his normal running and workout routines.

On the other hand, Dr. Walter indicated that her training schedule in past years has consisted of a long run on the weekend, a medium length run on Wednesday, and usually several other short runs during the week. While she plans on running this year, her participation is contingent on healing fully from a recent ankle injury.

Aside from the physical benefits, part of the fun of doing the half marathon on Thanksgiving, according to both Mr. Whyte and Dr. Walter, is getting the chance to indulge even more than normal during their Thanksgiving feasts. “After my first half marathon on Thanksgiving, I definitely ate a lot of cheesecake,” said Dr. Walter. Following the race, she will get together with her family and close friends for a traditional Thanksgiving meal. “Food just tastes better once you’ve run 13 miles because you’re so depleted of nutrients,” she said.