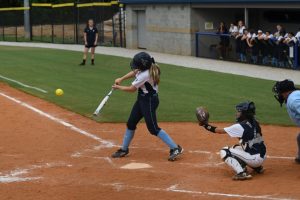 Senior Presley Marxmiller drives the ball for a base hit. Photo: Fred Assaf

The Pace varsity softball team achieved an impressive 16-9 record this year, 10-3 in region play, and advanced yet again to the AAA playoffs. Senior captain Presley Marxmiller led the team with her talent and experience playing the game. She was first on the team in slugging percentage with a .629 average and was named to the 5-AAA First Team All-Region team.

Junior and centerfielder Caelan Corbally also was named to the First Team All-Region team and she made her presence known at the plate, leading the Knights in almost every major batting statistic. She finished the season with a .419 batting average, .581 on base percentage and 13 runs batted in.

But another notable aspect of this season is how talented the underclassmen are and the big impact the freshmen had on the team. Freshmen Lane Brickley, Helena Harris, Camryn Jones, Jamie Kornheiser and Sydney Silverstein played significant roles for the team both on the field and at the plate.

Kornheiser is new to Pace this year and has been playing softball since she was six years old. Prior to coming to Pace, she played for The Epstein School and several travel teams. She started for the Knights this year, playing shortstop and third base, and batting throughout the middle of the batting order. “The skill transition from middle school to high school was bigger than I expected,” she said. “The game is much more competitive and the teams we play against are much more experienced.” Practicing with the softball team before the school year started helped make her transition to Pace a bit easier. “Having some softball friends on the first day of school was special because I knew people right when I walked in as a new student and I did not feel alone,” said Kornheiser.

Kornheiser had the team’s second highest batting average (.387) behind Corbally, and tied for the most doubles (with Corbally and Marxmiller) with four. She also became close with coaches Courtney Morrison, Jewell Marable and John Legere. “The coaches put their main focus on attitude and effort because those are the two aspects of the game that you can control,” said Kornheiser. This offseason, Kornheiser will likely play for a travel team but is undecided about which one she will play for. Next season, she is looking forward to developing her skills as a player and as a teammate. “I think we will do well because of how close our team is and how well we work together,” she said.

Silverstein is a Lifer at Pace and has been playing softball since she was eight. This season, she was the team’s only pitcher and had to pitch for the entire game, almost every game, which is very difficult, especially for a freshman. “Having a lot of freshmen on the team made it a lot easier,” she said. “We had fun doing the freshman jobs like filling water and carrying equipment.” She hit second and sixth in the batting order and had a .300 batting average. “Being a pitcher helps me at the plate because I can sometimes read the spins of the ball and can base my swing off of that,” said Silverstein.

Silverstein also stays involved in the sport outside of Pace. She helps her dad with the NYO Adrenaline travel team and plays for the Atlanta Premier. “It’s nice to have friends from other schools who play softball and it is always fun to play against them during the Pace season,” she said. “Next season I think that our team will be even stronger than this past season because of how a lot of our players are underclassmen and we will have more experience.”