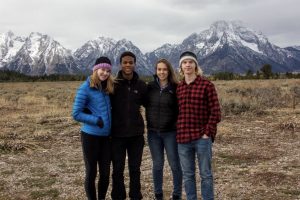 The ICGL team had access to key people involved in conservation efforts. They met with Alan Redfield, a rancher who is the Chair of Agriculture in the Montana Committee Assignments, and he spoke about the conflict between ranchers around Yellowstone and the conservation efforts inside the park. Ranchers consider themselves to be the original conservationists because they have to rely on the land for their income, and they feel as though conservationists for the government don’t listen to the ranchers who have been preserving the lands for generations. Ranchers want buffaloes to be spread among the states, since the re-growth of buffalo has increased so much that buffaloes are beginning to wander out of the park, especially to Native American reservations. But federal laws prevent the movement of animals across state lines.

They also worked with wolf biologist Doug Smith, who was responsible for reintroducing wolves into Yellowstone. The last wolf was killed in 1926, but in 1995, 41 wolves were released back into Yellowstone. They now have 108 wolves and 11 packs, and because of the wolves, the elk population has begun to decrease, which means that the park grassland can replenish. Grizzly bears were another species that used to be hunted in the 1950s and 1960s, but Grizzly bears are now also being repopulated at Yellowstone.

“Studying conservation at Yellowstone was really interesting because I got to see how conservationists work first-hand,” said Richardson. After learning from some of the key environmentalists, Global Leaders are now aware of how values seem to be shifting away from conservation protection because of the current political atmosphere. “People’s values are turning towards profit at the expense of wildlife,” said Ms. Anderson, meaning that the government might start selling preserved land to make more money.

“Conservation is a group effort and requires people to really understand an ecosystem and the effects that their actions have in it,” said Ray. “We need to foster respect and love for nature. Conservation efforts are about making a change that affects tomorrow even if the results aren’t apparent today.”