Heelys Roll Back to Pace 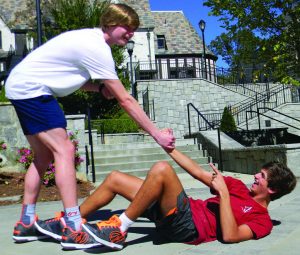 Pace Academy upper schoolers have revived the 2000s trend of rolling shoes with the new tradition of Heely Friday. For the past two months, several junior guys have been wheeling around the gardens during break and frees every Friday. The shoe fad has slowly spread to a few women in the junior and freshman class.

It began one afternoon during F free in the Seaman Family Student Commons. Juniors Andrew Ladden and Charlie Kaye were browsing Amazon when they collectively decided to order the only thing that would allow them to cut down on the long walk from the Upper School to the Inman Center. “[The Heelys] were such a cop,” said Kaye. “At first I thought they were a chop, but with a little thought, [Ladden] and I realized we had to get them.” This common terminology surrounds the world of shoe fashion, and a “cop” means one has bought something that improves their kick game.

There are many valid reasons why the Heely disappeared from the market for several years. The iconic shoe was somewhat uncomfortable and impractical. The wheel juts out from the sole of the shoe, causing the shoes to make a sharp clicking sound every time they hit the floor. The tongue of the shoe is made of thick, cheap cloth and the temperatures inside the shoe become quickly uncomfortable. They all have bad designs and are an obvious shoe not to have for the fashion savvy. The wheel also digs into the heel of the person wearing the shoe, and the wheel makes them heavy and unwieldy. The only time Heelys are worth having is when one is actually rolling, but the walking aspect of the shoes is terrible. There is the option to detach the wheel from the shoe, but the fit is still awkward and uncomfortable. “I didn’t really know what I was getting into when I ordered them,” said Ladden. “They were definitely difficult to learn and now that I know how [to use them], I still wipe out every once in a while.”

The Heely Rolling Shoe was patented by Roger Adams in 1999. The dangers of the shoe were easy to realize with the invention and they quickly came to fruition. The American Academy of Pediatrics published a study revealing that over the summer of 2007, 8% of pediatric department work was due to Heely injury. Yeovil, a small town in England, consequently banned the shoe in the town.

But all of the discomfort and downsides to the shoe do not keep Pace students from enjoying Heelys to their fullest extent. They are comical and entertaining shoes and if one can learn to wheel with enough intensity, one can impress a few onlookers. “Overall, I definitely think it’s worth it,” said Kaye. “Yes, they are annoying to wear, but they add some flavor and fun to the school day.”