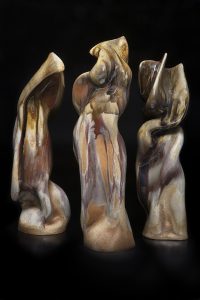 “The Three Graces” by France Dorman is a wood fired ceramic sculpture on display at the Hambidge Center. Photo: France Dorman

Pace photography and sculpture teacher France Dorman was invited to participate in the Hambidge Center’s annual Invitational Gallery Show and Sale Oct. 14-Nov. 25. Located on 600 acres of land in the mountains of north Georgia, the Hambidge Center offers a sanctuary for artists of all disciplines to live and find inspiration to create their works of art. Writers, painters, photographers, sculptors, potters, and a multitude of other artists submit proposals to the Hambidge Center with the hopes of being approved to live in one of the several resident homes there.

Mr. Dorman is one of the artists who was approved to live on the Hambidge land for the last nine years. “The Three Graces,” a name derived from Greek mythology, is the title of the collection of sculptures he created during his time there this fall.

According to Mr. Dorman, art can either be representational, abstract, or non objective. Representational art mimics life, abstract art has a basis in reality but is not quite realistic, and nonobjective art can not relate to anything you’ve seen before. “‘The Three Graces’ are very abstract and basically non objective,” he said. “I like to call my nonobjective pieces ‘new realities.'” Although his pieces have unique forms that are like no other, the reason they are not completely nonobjective is because his inspiration is based on real life. “My main inspiration for the shapes of the sculptures was a woman’s figure,” he said. They are not supposed to be replicas of a woman’s body, but the movements were inspired by one.

Making sculptures like “The Three Graces” takes time and many steps. “I generally start out with an extruder which makes a perfect half inch thick cylinder,” said Mr. Dorman. “I manipulate the clay and push it around to configure it the way I like.” Many sculptors create a three-dimensional version of what they want to construct in a smaller form. They will refer to this model throughout the creation process.

“I’m hurriedly making them so I just kind of let the forms unfold naturally and go with the flow,” he said. Mr. Dorman chops up nylon rope and puts it into the sculpture’s clay body to construct his piece the way he wants. According to him, the nylon fiber in the clay allows him to push the envelope and angulate the surfaces.

Later, the fibers will burn out during the bisque firing. He then glazes the sculptures with Tenmoku (amber) glaze for the initial glaze coat, then uses Willie Helix (grayish to orange) glaze poured on top of Tenmoku glaze. He puts the Willie Helix glaze into a cup and pours it on top of the sculptures, letting it drip down naturally.

The kiln at the Hambidge Center is not like the electric kiln at Pace or the soda kiln ceramics teacher Mark Knott and Mr. Dorman made out back beyond the Pace parking lot. They use a wood fired kiln called the Anagama Kiln. It only fires twice a year because it is a major logistical operation involving lots of time and people. It involves fire and the constant supply of wood to keep the kiln burning.

“It is a very volatile environment inside the kiln,” he said. “Some people want to get a perfect spot inside the kiln in order to get their desired outcome when it comes to the color. I do not have a particular spot I want my sculpture to be at, so there is always a surprise when it comes out.” After “The Three Graces” came out of the kiln, the sculpture had a rough, mat finish and a glossy glaze. “I like looking at differences in the colors and the textures between the glazed and unglazed sculpture,” he said.

After they were made, the three sculptures were put into the Hambidge Gallery where they became a part of the show and sale. “I put a big price on them because I really do not want them to sell,” said Mr. Dorman. “They are so new to me and I like to have them around the house for about a year or two before I show or sell them.” If they do sell, the Hambidge Center splits the money equally with the artist. That money will go to further Hambidge auctions and other fund raisers. Many artists donate their work for these events. “It’s a big auction with high end work and high end artists,” said Mr. Dorman. “It’s just a wonderful program.”