Gun Control and Reform: A Necessity 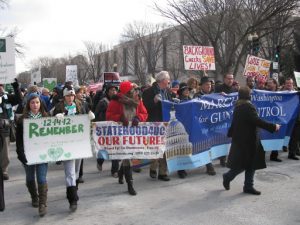 Gun control protesters in the 2016 March on Washington. Photo: The Blaze

In the aftermath of the horrific Las Vegas shooting on Oct. 1 in which 58 people were killed and 515 people were injured, the gun control debate dominates political conversations. This time, the debate needs to be different. The debate need not continue about whether to pass gun reform, but about what kind of gun reform will be passed.

This series of events is not new. After the Orlando; Aurora, Colorado and Sandy Hook shootings, there was talk of gun control, but no real reform. Every year in the U.S. 12,000 gun homicides occur, and seven children or teens are killed every day by guns according to the Centers for Disease Control and Prevention (CDC). The United States government is, in effect, consenting to this gun violence by not reforming even as attacks and murders continue.

The arguments that “guns don’t kill people, people kill people” and “there is no evidence that gun control will reduce gun violence” are fruitless positions. It is true that these massacres are caused by people, but with stricter gun laws, they will be fewer and farther between. If Stephen Paddock could only legally purchase a self-safety handgun, he only would have been able to do a small fraction of the damage he wrought. There is no need for citizens to legally wield semi-automatic guns, or any gun that can kill as efficiently as the ones used in past shootings do. The Founding Fathers did not perceive the lethal capability of future guns when they wrote the Second Amendment in 1791, so the all-encompassing “right to bear arms” is anachronistic.

Previous legislatures have even realized the Second Amendment should have its limitations. In the 1920s, machine guns were legal, and they are no longer. Military grade weapons, such as grenade launchers and bazookas, are no longer available. This stance of restricting human access to killing machines needs to be applied further. Over time, people reconciled with the banning of machine guns, though they may have been opposed at first. The government should be at the forefront of conditioning people to understand and accept the benefits of gun control through stricter laws. Gun technology and power has increased, and safeguards need to increase along with it.

America must take this opportunity to learn from foreign countries. In 1996 in Australia, the Port Arthur massacre caused by lone gunman Martin Bryan with a semi-automatic rifle resulted in 35 deaths. In the weeks following the massacre, the Australian legislature passed gun reforms that banned semi-automatic rifles and required 28 day waiting periods and justifiable reasoning to buy guns. The number of mass shootings in Australia dropped from 11 in the ten years before 1996 to zero in the years since. The U.S. should apply similar laws that will hopefully result in fewer killings.

For example, the AR-15 rifle is the most popular gun in America. As of 2014, there are an estimated 9 million of them circulating in the U.S. The National Rifle Association (NRA) advertises it for hunters, but hunters believe it is “sloppy and controversial,” according to thinkprogress.org. The NRA is a sneaky organization that advertises powerful rifles for regular people under the guise that they are advertising for hunters. Also, after major attacks, the NRA distributes propaganda that influences people to believe the government will crack down on gun availability so that after mass shootings, gun purchases skyrocket. It is easy to find the corruption and flaws in the NRA, but it is more difficult to rise up against them.

The people of America need to take charge of this crisis. The NRA only has 5 million members, and many of them do not agree with the political stance that the NRA takes. Their powerful lobbyists pressure Congressional representatives continually to promote gun freedom and to prevent gun reform. They call and act before and after great massacres, while other citizens only think about gun reform in the short aftermath of a shooting. The average American can make a difference. The majority wants a change in gun laws, so the majority must take action to make that happen.