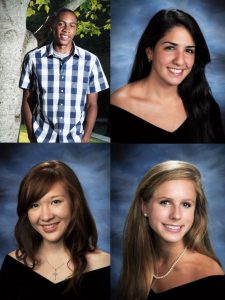 Mr. Swan, who played football and basketball in high school, has returned as a substitute teacher and an assistant coach for both ninth grade and varsity boys basketball. Mr. Swan was also part of Pace’s very first football team when he was an eighth grader.

“Playing sports opened up a lot of doors for friendships and connections,” said Mr. Swan. “Pace created this environment of family and community and just having a good time.” Mr. Swan continued to play basketball in college at Southern Illinois University (SIU). He described SIU as very different from Pace because there were almost 20,000 students, and because of his drastic transition from “a big city like Atlanta to a rural, country kind of town.”

After head basketball coach Demetrius Smith asked him to help out at the school and with the team, Mr. Swan thought that returning to Pace would be a great way to get back into coaching. “I’ll have lunch with some of my teachers and being able to sit on that side of the room versus being on the regular side of the cafeteria has been interesting,” said Mr. Swan. “I’ve always had a really good relationship with pretty much all of my teachers so it’s been a smooth transition back.”

Ms. Lattouf, the Associate Director of the ICGL, was a very involved student during her time at Pace. Her primary commitments were varsity tennis and Student Council, serving as student body president her senior year. She was given the senior superlative of Ms. Pace Academy. Ms. Lattouf attended Emory for college, where she was also super involved and had leadership roles around campus. “At first I didn’t want to go to Emory because it’s so close to Pace, and I wanted to feel like I was leaving and growing,” she said. “Then I realized that Decatur is so different from Buckhead that I really was going to a new place.”

Ms. Lattouf returned to Pace last school year after initially applying to be in a consulting position, but then a position working for the ICGL opened. “After understanding what it was, it seemed like the perfect transition, and it has been,” she said. “At first it was super weird to see my former teachers and call them by their first name.” However, she finds it very beneficial to work alongside such great people who have known her for so long.

Ms. Baldovski was a “lifer” at Pace, and in the Upper School she was part of the yearbook staff. She now works in the Lower School as the fourth grade associate teacher. When she moved back to Atlanta after majoring in Early Childhood Education at Auburn, she sought to rejoin the Pace community. Ms. Baldovski now works alongside her mother, Jody Rushton, who is a fifth grade associate teacher. “It’s also fun to see my mom around school, although there are many days where I don’t even see her,” she said.

Ms. Shoji, who was a debater, cheerleader, student ambassador, Student Council representative and member of the Honor Council during high school, has returned as the Alumni Relations Manager. Ms. Shoji attended the University of Alabama for her undergraduate and master’s degrees, earning both degrees in four years. “It was super easy because I was very well prepared,” said Ms. Shoji.

During her time back at Pace, she has observed the greatest change, besides the new upper school building, to be the emphasis on sports, and the ability for Pace to compete with nearby schools more evenly. “Pace is like a family; it’s a community,” said Ms. Shoji. “Through that community you know that you are going to be supported in whatever your endeavors are.”

According to all four alumni, the factors that contributed to their successful experience coming back to Pace are the sense of acceptance and the welcoming atmosphere that the school’s community offers. As Ms. Shoji said, “it’s Pace. Why not come back? It’s such a great environment for a first job.”