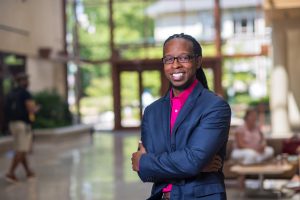 Dr. Ibram X Kendi, an award winning historian and New York Times Best Selling author for his book “Stamped from the Beginning: The Definitive History of Racist Ideas in America,” will speak to upper school students in an assembly on Nov. 16. In addition, Pace has partnered with the National Center for Human and Civil Rights to host an evening event open to the public from 6:30-7:30 p.m. in the Fine Arts Center. According to the National Center, Dr. Kendi, along with moderator Jim Burress with WABE, “will examine the impact of segregation and racism on contemporary Atlanta” that evening.

Dr. Kendi, a New York City native and Knicks fanatic, earned his doctoral degree in African American Studies from Temple University in 2010. He has received many research grants and awards from top universities including Duke University, Emory University and Princeton University. Currently Dr. Kendi is a professor of history and international relations and the founding director of the Antiracist Research and Policy Center at American University.

Dr. Kendi won the National Book Award in 2016 for his book “Stamped from the Beginning.” After winning the award, Dr. Kendi said that he wrote the book for the generations of Americans who have been led on by racist ideas that there is something wrong with black people. The message he wants to convey to Americans is that we need to fight for an equitable America where all racial groups are equal. Dr. Kendi was 34 at the time and was the youngest author to win the award for nonfiction in over 30 years.

In a talk he gave to the students of the Taft School in Connecticut he explained his notion of a “racist idea.” “I ended up defining a racist idea as any idea that suggests a racial group is superior or inferior to another racial group in any way,” said Dr. Kendi. He conducted years of research and study to develop his ideas and thoughts on racism, specifically racism against the black population.

Later in his speech he reasoned that there are two ways to explain the disparity between two groups, one being that the winning team is superior to the losing team. The second reason is that the rules favor one group and not the other. “If we relate that to race in America, whites historically have been on the winning and living end of American society” due to discrimination, he said. Dr. Kendi has given many lectures to a range of age groups from high school students to adults. He is a strong advocate for educating people about racism and what needs to be done to end it.

Pace Director of Diversity and Inclusion Joanne Brown is a fan of Dr. Kendi and the ideas he has to share. “Dr. Kendi takes a very unique and non-emotional approach to the conversation of racist ideology,” said Mrs. Brown. “He really dissects this notion of racism in a historical context.” Mrs. Brown has watched many of his lectures online and is excited to see him in person and hear him speak to the Pace community.

Many members of the Pace faculty have read his book “Stamped from the Beginning,” including English teachers Ricks Carson and Emily Washburn, history teacher Christine Carter and debate teacher Shunta Jordan. Several other teachers are in the process of reading the book, and Ms. Jordan has started a “Stamped from the Beginning” faculty book group that held its first meeting on Nov. 9.

Dr. Carter is interested in learning more about racism and racist ideology. She plans to integrate the theme into her class discussions to allow students to share their opinions. “I personally like the way that [Dr. Kendi] looks at some of the events that I studied for many years,” said Dr. Carter. “I would definitely recommend [“Stamped from the Beginning”]. It is a helpful and thought provoking way at looking at some of the stories in American history that one might think they are already familiar with, as he approaches them in a different way.”