Citizens Have Right to Bear Arms 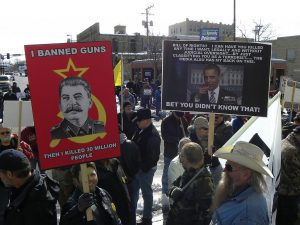 Protestors advocate for the continued expansion of gun rights at a rally. Photo: Fibonacci Blue, Flickr

On Oct. 1 at 10:05 p.m., Stephen Paddock opened fire on concert goers in Las Vegas, killing 58 people and injuring 515. Only a few hours passed before members of Congress, mostly Democrats, began to rekindle the debate over gun control. Led by Senate Minority Leader Charles Schumer, Democrats are now working to draft pieces of legislation that would prohibit certain accessories, such as “bump stocks” used in the mass shooting.

The text is as follows: “A well regulated militia, being necessary to the security of a free State, the right of the people to keep and bear Arms, shall not be infringed.” Before we start jumping to conclusions about the meaning and intent behind this amendment, let’s take a look at the historical background.

Justice Scalia’s opinion in the 2008 Supreme Court case District of Columbia v. Heller outlined that the right to keep and bear arms (as declared by William and Mary) was not dependent upon whether or not there was any sort of organized state or private militia, rather it was purely an individual right.

Another important piece of historical information to consider when trying to understand the Second Amendment is the American Revolution. George III had been trying to disarm colonists for a while, hoping to demolish any hope they had of revolution.

Despite the king’s efforts, the first shots of the war, fired in Lexington, Virginia, were fired by weapons privately owned by colonists. In fact, the American forces in the battle were trying to capture a British army in order to equip the forces of rebellion.

Using this background, one can better understand the purpose behind the Second Amendment and its implications in modern society. Furthermore, one can deduce from above that the Founding Fathers’ goal in writing the Second Amendment was to protect the individual right of citizens to own their own weapons.

This argument is clear because the success of the Revolution, and the very existence of our country, rested on the fact that citizens owned their own arms. Therefore, the Founding Fathers were cementing into law one of the rights that made the separation from England possible, a perfectly sensible thing to ensure.

Many will argue that the wording of the Second Amendment suggests that a citizen’s ability to own arms is contingent upon whether or not they are associated with “a well regulated militia.” This is simply not the case. The preceding dependent clause of the amendment clarifies the right of citizens to form militias, a right contested by George III. It is not a prerequisite requirement for the ownership of firearms.

It is important to understand that times change, and the weapons manufactured by the defense industry in the 21st century are very different from those fired by some of the first American patriots in Lexington.

However, the principle behind protecting the rights of citizens to keep and bear their own arms remains the same. There is certainly ample reason to examine the possibility of limiting and regulating the sale and private ownership of certain firearms and accessories associated with them.

However, it is important to realize that much regulation already exists in the industry and it is unlikely that added regulation will help the issue of mass shootings.

Categories
National NewsOpinionPolitics
Back to Top