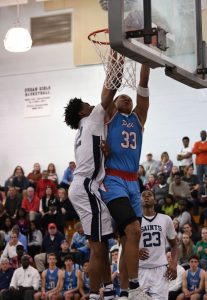 Over the past two seasons, the Pace Academy boys basketball team has made waves not only throughout Georgia, but also nationwide. The team competed in prestigious tournaments like the City of Palms Classic in Ft. Myers, Florida and the Beach Ball Classic in Myrtle Beach, South Carolina. The team also won the 2A State Championship and the 3A State Championship in 2016 and 2017, respectively.

There are always pressures and expectations for any sports team, particularly after successful seasons. However, the Knights have a lot to overcome in their quest for a three-peat this season, especially with the loss of Wendell Carter, Jr., ESPN’s fifth-ranked player in the nation for the Class of 2017. While it may be impossible to fill the shoes of Carter, Jr. (who now plays for Duke University), the Knights will primarily look to senior Isaiah Kelly to carry the majority of the weight.

“I expect to be the leader on the team,” said Kelly. “I think that there is a large expectation for me to be the ‘go-to’ player this year, and I feel like I am ready to do that. I feel like my increased role on the team gradually over the years has prepared me for this role.”

“Obviously, our goal is to win the state championship again,” said Todd. “All of us know that will take a lot of work. We have been working hard in the preseason, so we will be ready.” With a plethora of new talent from the freshmen class, the Knights will seek significant contributions from Cole Middleton, the 6’6 forward who will provide some size in Carter, Jr.’s absence.

The Knights will have plenty of preparation before entering region play. On Dec. 2, the team will play the 2017 4A state runners-up, St. Pius. The team will also play in two tournaments over winter break, one in Jacksonville, Florida and the other in Atlanta.

“When it is all said and done, we will control the controllables,” said head coach Demetrius Smith. “We will enjoy the moment while competing, defending at a high level and being great teammates to one another. That is all I ask of my team.”

The Knights had their first official scrimmage of the season against East Jackson High School in Inman on Nov. 7.