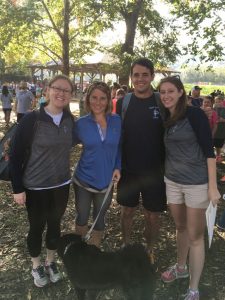 For the second year in a row, the Pace upper school community has supported the American Foundation for Suicide Prevention (AFSP) through the “Out of the Darkness” Atlanta walk. The walk was held on Nov. 5 in Piedmont Park.

The walks are the largest fundraiser sponsored by the AFSP. Beginning in 2004 with 4,000 walkers, the event has grown, with 228,000 participants across the country in 2016. This year, the Atlanta walk alone had 2,033 participants.

According to the AFSP, the walks “produce millions for suicide prevention programs, unite those who have been affected by suicide, and create communities that are smart about mental health.”

Last year, the Pace walk team raised more money than all of the other Atlanta teams, earning them the honor of leading the 2016 walk in Piedmont Park. The 2016 Pace team set a fundraising goal of $5,000 and ended up raising more than $16,000. Out of the 400 Out of the Darkness walks that were held around the U.S. last year, the Atlanta walk ranked fifth in terms of dollars raised, at $276,737.

Upper school counselor Amelia Tuttle was in charge of Pace’s participation in the Atlanta walk this year, and it was her first time participating. “I didn’t actually know about it until I came to Pace,” said Ms. Tuttle. “Mrs. Eden [organized] it last year, and she did a great job.”

According to Ms. Tuttle, the money raised by the walk goes toward “provid[ing] seminars and workshops in high schools and college campuses about depression, bipolar disorder and resources that you can access if you have thoughts of hurting yourself.” It also provides support for families who have lost someone to suicide.

“[Our participation in the walk] is us showing people that are struggling with this that [they’re] not alone, and that they have a lot of support,” said Ms. Tuttle. “Look at all of us that are here to show that there is a way out, and there is a light out of the darkness.”

Sophomore Lenox Herman was one of the Pace students who participated in the walk this year. It was her first time walking, and she was inspired to walk after her brother Avery Herman ’17, and his friends participated last year. “[The walk] gave an amazing sense of community and showed a united front against suicide, which was moving,” said Herman.

For teens and adults between age 15 and 64, suicide is the fourth leading cause of death. The AFSP works toward the goal of decreasing the number of deaths by suicide by 20% by 2025. “Suicide is such a permanent solution to problems that usually are temporary and fixable,” said Ms. Tuttle. “There is a solution, and there is a way out, and all of us here are able to help you and want to be able to support you.”