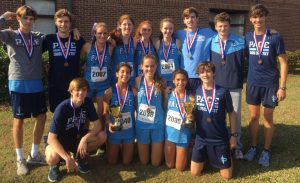 On Nov. 4, the boys and girls varsity cross country teams traveled to Carrolton, Georgia to race in the Georgia High School Association Class AAA state meet. Both teams saw strong performances from their runners, with both finishing third on the podium. Each team also had a runner place in the top ten at the meet.

The boys’ squad started off the day strong for the Knights. Entering the state meet ranked seventh in Class AAA, the team, led by senior Jack Douglass, exceeded expectations with their third place finish. Douglass set a new state course personal record on his way to a fourth place finish. Following him were sophomores George and Sam Adams, senior Ben Thompson and freshman Robert Houser, finishing 13th, 22nd, 58th and 62nd, respectively. Douglass was also named MileSplit Georgia Runner of the Week for the last week of the regular season and has been invited to race in the Meet of Champions.

The girls team entered the state meet ranked third in Class AAA. The girls runners are led by sophomore Payton Payne who finished eighth at the state meet. Payne, like Douglass, was named MileSplit Georgia Runner of the Week for the last week of the season and has received an invite to race in the Meet of Champions. Following Payne in the state meet were freshman Laura Romig, junior Veronica Sandoval, sophomore Paula Sandoval and freshman Kathryn Hood, finishing 16th, 19th, 20th and 23rd, respectively.

With such strong runners coming from the current freshmen, sophomore and junior classes, both cross country teams look to have similarly strong performances in the upcoming season.