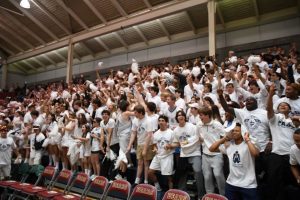 The squeaking of feet and pounding of spiked volleyballs echoed throughout the lower level of the Inman Center as the Pace Academy varsity girls volleyball team began practice in early August. With a devastating loss in the AAA state championship last year still haunting them, the Knights had their eyes set on playing throughout the fall season, hoping to go deep into the playoffs.

Last season, six seniors led the Knights, two of whom – Meghan Botsch and Summer Brown – went on to play volleyball at the collegiate level. One of the most memorable games of the 2016 season was the incredible home win over Lovett in the area championship. Knights fans dressed in jerseys and packed the Inman Center stands, propelling Pace to a 3-1 win. The rivalry matches did not end that night, however as Pace advanced to the state championship for the first time in program history, but ultimately fell to Westminster.

This season, senior Cameron Perchick and juniors Alexandra Baker and Davis Mathis pushed the team as captains with their leadership and enthusiasm, helping to rebuild the team from the talent lost with the graduation of last year’s class. “Davis was the glue off the court for this group of girls and was extremely vital to our success,” said Head Coach Anna Bush. “She understands a lot of the team’s dynamics and has been important in keeping the team’s relationships healthy.”

Freshmen Hannah Pace and Kalissa Greene also contributed significantly in their respective areas. “Hannah is a very versatile player, and she can play just as well on the right side of the court as the left side, which is rare,” said sophomore Lucy Ferry.

Greene does her work near the net, as she is the team’s primary setter. She is number four in the state in assists (767), making her vital to the offensive side of things, playing a quarterback-type role. “Kalissa had an incredible impact on our team this year, filling the shoes of Meghan [Botsch ‘17] well,” said sophomore Ada Jane Agolli. “She was the starting setter throughout the whole season.”

Sophomore and second-year starter Dominique Turner proved herself as one of the most valuable and consistent players for the Knights. Turner is the team’s libero, meaning she specializes in defensive play and can substitute without prior notice to the officials. Turner is a ball hunter and keeps plays alive, as she is No. 4 in the state in digs with 527.

Coach Bush led the Knights as they finished the season with a 29-11 record and solidified themselves as a volleyball powerhouse as AAA state champions. The Knights’ success this season began with the competitive atmosphere in practice and continued all the way to the Holy Innocents’ gym on Oct. 28, as Knights fans fully bought into cheering on the Knights.

“I’ll point to the Pace community, because having their support is a very powerful thing for the players and that was huge,” said Coach Bush. “The students made an effort to get there early and get on the side of the team’s benches. It was one less distraction, there wasn’t any heckling – that helped us.”

The state championship game came down to the third set, when the matches were split 1-1. Pace rallied back from being down 10 points and the momentum shifted in favor of the Knights for the fourth and fifth sets. The Knights dominated the fifth set, winning it 15-8, bringing home the first ever volleyball state championship to Pace.