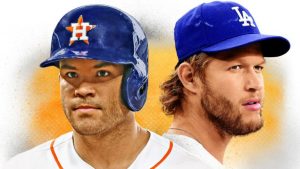 The Dodgers’ game one win at home on Tuesday night in their first World Series since 1988 was watched by almost 15 million people, including many at Pace Academy who were eager to weigh in on their predictions about the matchup. Considering that the Los Angeles Dodgers and the Houston Astros were each viewed (depending on who you asked) as “the best team in baseball” throughout the long season, opinions on the World Series contest were strong and inconsistent.

The Los Angeles Dodgers led the majors with 104 wins this season and were hardly challenged in the postseason, going 7-1. The Houston Astros had 101 wins before going 7-4 in the playoffs. Both teams share solid, young impactful players and a strong offense, but some at Pace felt that the pitching might be the difference in the World Series outcome. “The Astros are going to win because their pitching staff has more depth and their team is more dynamic than the Dodgers,” said sophomore Harris Greenbaum. “I feel like the Astros are meant to win it this year based on their hitting and overall dominance in the game.”

Pace freshman Bennett Boushka believes that the Dodgers may win the pitching matchup. “The Dodgers are going to win the World Series this year because they have the best pitcher in baseball, Clayton Kerhsaw, and I think that riding on his momentum they will be able to pull off another World Series win.” Freshman Sam Webb predicts that Houston will be the World Series winner, “because they are stacked with some of the best players in the MLB this year including Jose Altuve and Justin Verlander, and I think they are just a great team overall.”

Regardless of the dueling strengths of each team, it is hard to overlook the fact that the Astros continued to win, even though Houston was devastated by the effects of Hurricane Harvey. CBS Dallas Fort Worth News quoted Astros manager A.J. Hinch as saying the team understands its responsibility to represent Houston and that helping to boost the city became a “rallying point for the team.” Senior David Roos noted exactly that factor in his prediction. “I think the Astros will win because they have had a harder road to the World Series and have learned to fight back when behind.”

Game five is tonight in Houston, with the series tied at 2-2. The game will air on FOX at 8 p.m. ET. Starting pitchers will be Clayton Kershaw for the Dodgers and Dallas Keuchel for the Astros.