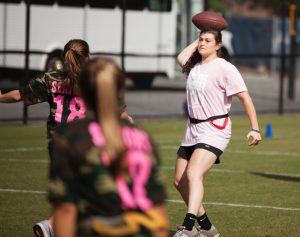 After four years of competing in Pace’s annual Powder Puff games, the Class of 2018 was unable to break their losing streak. Donning their camouflage jerseys, the seniors with their two touchdowns for 14 points, one by senior Molly Shapiro, were no match for the juniors, who put 28 points on the scoreboard.

The Class of 2019, in baby pink, acquired their third consecutive win and their pride is now greater than ever. “Our plays and the ladies’ raw athleticism and drive to win have made us an unstoppable force,” said junior Powder Puff coach Brogan Smith.

The ability of the junior girls to pass and run the ball so efficiently allowed for their domination on the field. “I was very impressed with the way the girls played,” said junior Nate Robinson. “Watching Joelle Zelony thrust the ball down the field was something no man could have done.” Highlights from the game include junior Madeline Janki intercepting three passes, bringing one in for the touchdown, and juniors Emily Pulver, Devan Johnson and Kayla Ross catching touchdown passes. “This was definitely a peak in my life,” said Johnson.

The games took place on Friday, Oct. 13, beginning with female athletes of all grades, along with their coaches and supporters from their class, scrambling to the lower field. The freshmen, in their light blue Powder Puff T-shirts, played the fierce sophomores in light purple. The sophomores dominated the field, tearing through the freshmen defense and scoring three touchdowns. The final score was 21-7.

Despite losing, the freshmen enjoyed the game and were happy to be able to compete. “It was a fun experience,” said freshman Caroline Janki. “Even though we lost, I’m glad I got to play and have a lot of fun.”