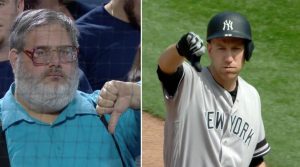 Over the last several weeks, whenever the New York Yankees have done something good, players and fans acknowledge it with a thumbs down. Doesn’t make sense? Here’s the backstory.

On Sept. 11, the Yankees played against Tampa Bay during a three-game series at Citi Field (the home field of the New York Mets), since the Tampa area was still recovering from the effects of Hurricane Irma. In the first game of the series, Yankee Todd Frazier hit a giant three-run homer that ignited the largely hometown crowd.

But the camera zoomed in on one fan who appeared to be completely unimpressed, displaying his displeasure with a thumbs down. The motion was shown repeatedly throughout the game, and word of the funny gesture quickly spread. After the game, a photo of the spectator’s thumbs down went viral, becoming an internet sensation. Soon, the Yankees adopted the gesture as players in pinstripes could be seen from the dugout celebrating with thumbs downs with every hit or run.

According to the New York Daily News, the thumbs down guy is not a Tampa Bay Rays fan as one might expect (given the fact that he was rooting against Frazier and the Yankees). Gary Danaier is a Mets fan from Queens, New York (the location of Citi Field) who had taken advantage of the lower ticket prices offered to Mets season ticket holders to come to a local game. Since the Mets and Yankees are city rivals, it would stand to reason that this Mets fan would be rooting against the Yankees.

Danaier is now getting his own bobblehead doll, to be produced by the National Bobblehead Hall of Fame and Museum. The 8″ tall bobblehead will be available for purchase in February, just in time for spring training.