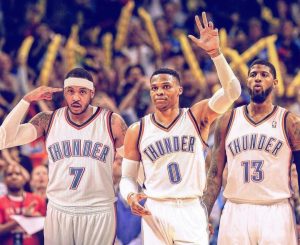 With the National Basketball Association (NBA) kicking off its season today, there are many new rosters and familiar faces for 2017-2018. Top players including Chris Paul, Carmelo Anthony, Kyrie Irving and many more have decided to take their talents to a new city in search of a championship.

For a while, the Boston Celtics had been in pursuit of acquiring star forward Gordon Hayward from the Utah Jazz, and this offseason they successfully did so. After hearing this news, Cleveland Cavaliers point guard Kyrie Irving decided he wanted out of Ohio and was miraculously traded to the Celtics for 5’9 point guard Isaiah Thomas. This trade came shortly after Thomas’ sister had passed away.

When Thomas got the text from Celtics general manager Danny Ainge, he said in an interview for Sports Illustrated, “I might not ever talk to Danny again. That might not happen. I’ll talk to everybody else. But what he did, knowing everything I went through, you don’t do that, bro. That’s not right.”  He finished with, “I don’t think the Boston Celtics got better by making this trade.”

Along with Thomas, the Cavs also attained Jae Crowder, Ante Zizic and a 2018 first round pick from the Celtics. Cleveland was not done, however, as they later obtained Dwyane Wade, Lebron James’ former teammate, and Derrick Rose.

Also in the East, the Minnesota Timberwolves made a trade in order to get the superstar from the Chicago Bulls, Jimmy Butler. Now the Wolves are being led by former number one picks Andrew Wiggins and Karl Anthony Towns, along with Butler.

The Cavs, Celtics and Timberwolves may be the powerhouses of the East, but the Western Conference seems to have taken the edge this offseason. Starting with the Houston Rockets, phenom James Harden was desperate for another star to play alongside him. His wishes came true when point guard Chris Paul from the Los Angeles Clippers was traded to the Rockets. With Harden and Paul maintaining the backcourt, this team can be a serious contender.

The Oklahoma City Thunder could possibly have overtaken all teams this summer with their two acquisitions. They already had the current Most Valuable Player, Russell Westbrook, but he was not enough to lead the Thunder far into the playoffs, let alone a championship. Indiana Pacers forward Paul George had said he wanted out of Indiana and possibly move to the West Coast and play for the Lakers, but he may have just gotten a better chance at a championship.  He was traded to the Thunder for Victor Oladipo and Domantas Sabonis.

The Thunder definitely won this trade, as they now have two of what could be the top players in the league. The Thunder did not stop there, however. They were in search of one more player with the firepower to take them to the championship, and again they got what they wanted. New York Knicks hero Carmelo Anthony joined Westbrook and George in Oklahoma in hopes of a championship .

The Los Angeles Lakers had been looking to rebuild their team with a young group of players. This offseason, the Lakers traded point guard D’Angelo Russell and center Timofey Mozgov to the Brooklyn Nets. “D’Angelo is an excellent player,” said general manager Magic Johnson to ESPN. “We want to thank him for what he did for us. But what I needed was a leader. I needed somebody also that can make the other players better.”

The Lakers wanted UCLA point guard Lonzo Ball, and on draft night they picked him as the second overall pick. Lonzo is regarded as not only a great player himself but he makes the players around him even better. The Lakers  also selected Kyle Kuzma out of Utah in the draft, and he has shown the Lakers through his preseason games that they made the right choice picking him. The Lakers now have the young players they were looking for and are set to hopefully make the playoffs this year.

NBA teams made many other trades over the summer, including Paul Millsap to the Denver Nuggets, Dwight Howard to the Charlotte Hornets, and Danilo Gallinari and Patrick Beverley to the Los Angeles Clippers. With all the new rosters, some teams remained nearly the same, including the Washington Wizards, Portland Trailblazers and the reigning champions, the Golden State Warriors. These teams believe they don’t need any more additions to win and have what it takes to be a championship contender.

This offseason will go down as one of the most action packed ones ever in the history of the NBA. Though many of the best players have teamed up this season, will they be able to play together and not have one player “ball hog?” The first game is today in Cleveland as Kyrie Irving faces off against his former team, the Cavs, in a battle of the two top contenders from the East. Tune in at 8 p.m. on TNT to see who will win this evenly matched game between Lebron and the Cavs, and Kyrie and the Celtics.