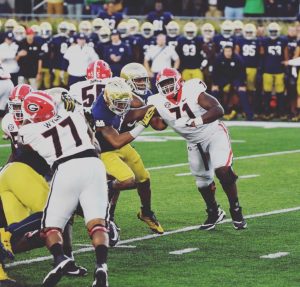 Pace Academy’s Andrew Thomas ’17 has garnered lots of attention at the beginning of the football season for outstanding play on the University of Georgia’s offensive line. As a true freshman, Thomas has a firm grip on the starting gig through six games thus far. Head coach Kirby Smart called the 4-star prospect “extremely mature,” and he received high praise from teammates in the preseason.

Thomas, an offensive tackle, was crucial to the Pace football team’s success before beginning his journey at UGA. While at Pace, he was named All-American, All-State for offense and defense and won the team’s Most Valuable Player award.

Thomas seems to have made a smooth transition from playing high school football to playing in the Southeastern Conference (SEC). “The best thing about playing for UGA is being able to compete at a high level on one of the biggest stages in college football,” said Thomas. “The hardest thing was adjusting to the workouts and the speed of the game.”

Thomas’ story would be incomplete without mentioning some of the people who have had significant influences on him thus far. He says that his support has come mostly from his teammates, family and coaches.

Although Thomas is now at college in Athens, his family remains a huge influence on him. “I would say my inspiration and motivation comes from the opportunity to set my family up for life,” he said. Thomas and his sister, Pace sophomore Brianna Thomas, are very close. “My relationship with my brother is an unbreakable bond,” said Brianna Thomas. “When he left for college I honestly think it was harder for me than it was for my parents, but he is moving on to great things. I could not be more proud.”

Another important figure in Thomas’ life is Coach Kevin Johnson, Pace Director of Security and the football team’s offensive coordinator. Johnson coached Thomas all four years he attended Pace, and they continue to stay in touch. Johnson has attended UGA home games, and he even traveled to Notre Dame to watch Thomas play. According to Johnson, they talk every Sunday, and about three times throughout the week. “I give him my point of view on what I’ve seen of the game, whether I’m watching it in person or on TV,” said Coach Johnson. “I’m just being a coach outside of the norm.”

Coach Johnson believes that what makes Thomas such a successful football player is how well he understands the game. “Football is 85% mental and 15% physical,” he said. “And the mental part he understands.”

Thomas has received national attention and many awards, but “none of those awards matter if you aren’t winning,” according to Coach Johnson. Thomas, however, is good at helping his team win. In his junior year at Pace, he played a major role in winning the state championship, playing both offense and defense. Likewise at UGA, his team is off to a 6-0 start and was ranked fifth in the nation going into the game against Vanderbilt on Oct. 7, according to the Associated Press Poll.

“When you get a kid that size that has power and length, it’s hard to stop him,” said Coach Johnson. No one, including his opponents, can seem to stop Andrew Thomas.