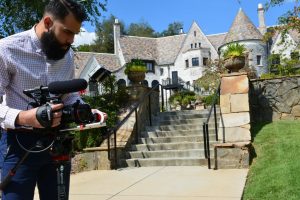 In a world dominated by digital content, Pace Academy has taken strides to expand its online video presence. Pace recently hired videographer Omar López Thismón to film Pace life and create stories so the Pace community can connect with, as well as attract, potential applicants. López Thismón will most likely be capturing action shots at your next Pace event.

López Thismón moved to Atlanta three months ago from Orlando, Florida where he was assistant creative director for Trinity Preparatory School. He is originally from Miami and previously worked for the University of Miami as a visual production and marketing manager. He was hired at Pace as a member of the Office of Communications.

“My role is to produce digital video content that will tell the Pace story through the eyes of students, faculty, alumni and parents and try to get a large digital web presence with the video content,” said López Thismón. He has filmed at volleyball senior night, the Pace vs. Westminster football game and the one act play dress rehearsal. “I try to get to as many things as I possibly can,” said López Thismón. “My big project right now is an interdisciplinary arts film, and I will be around Pace all Spirit Week.”

López Thismón took an unorthodox route to his filmmaking profession. “At first, I wanted to be a sportscaster and I studied for a degree in broadcast journalism,” he said. In gaining experience in front of the camera at Southern Adventist University, López Thismón realized that being behind the camera was the place for him. “I finished my broadcast journalism degree, but in doing so I fell in love with lighting, cinematography, and filmmaking in general,” he said.

López Thismón feels fortunate to be a part of the Pace community. “In my interviews with Mrs. Jones and Mr. Assaf I fell in love with the school,” he said. Documenting Pace Academy poses a new challenge to Mr. López Thismón, but it is also the most fulfilling. “Stories at Pace are different,” said López Thismón. “From teachers to students, people have such a humanitarian lens to what they do and say.”

The cinematographer also does all the editing on his projects, giving him full control of the impact. “My main goal [in my films] is to tell whatever story I’m telling accurately, but also compellingly,” said López Thimsón. “I want people to watch and say, ‘Wow, this is interesting,’ or, ‘These students are really great.’” He strives for emotional responses to his works. “I have the most fun making films when they have a social impact and tell a story; a story that somebody will watch and be changed by just for a moment,” said López Thimsón.