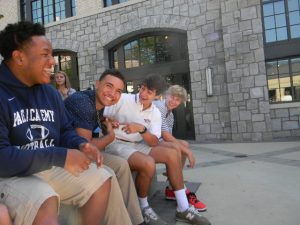 With the start of every school year, the Arthur M. Blank Family Upper School opens its doors to dozens of “new kids.” While most of the new students are freshmen, Pace welcomes two new juniors to the Class of 2019. Darian Howard and Chilton Tolliver are both student-athletes who are glad to join the Pace family and contribute to the community both in the classroom and on the field.

Darian Howard moved from Kansas City, Missouri. “I came here to live with my dad,” said Howard. “I chose Pace because I loved the setup and the classrooms when I toured.” Entering a new school mid-way through high school is always challenging, especially in an entirely new city. “At first, it was difficult to find where to spend free time and to find people [with whom] to spend it,” said Howard. “I didn’t know any kids coming in and I don’t yet know what to do in the city.”

Howard is settling in quickly to the Pace community. “I plan to play varsity baseball in the spring,” he said. “Since there are a lot of third basemen, I am enthusiastic about starting at first base.” Howard has played baseball from a young age and looks up to some of the game’s legends. “If I could have dinner with anyone that ever existed, I would have to choose Jackie Robinson because we share the same love for baseball,” he said. “I think it’d be very interesting to see through his perspective when he had to overcome adversity and racism. I just want to find out how he would feel knowing that he created such great opportunity in the world for people.”

Chilton Tolliver transferred to Pace from Grayson High School in Loganville, Georgia. “I decided to come to Pace because I really liked the culture of the school and the overall feel,” he said. Tolliver believes that academics are of great importance. “I came to Pace because it was the best decision to prepare for college and eventually my career as a video game programmer.”

Tolliver already feels settled into the community. “My favorite part about Pace is everything,” said Tolliver. “I made fast friends with coaches and students and fit right in.” Tolliver has joined the Pace Academy Board of Diversity and plays center for the varsity football team. Tolliver’s interests also extend more broadly to the welfare of the country. “I would love to have dinner with both President Obama and President Trump to get their perspective on what the future of the nation should look like and also the difficulties, strains and privileges of being president,” he said.