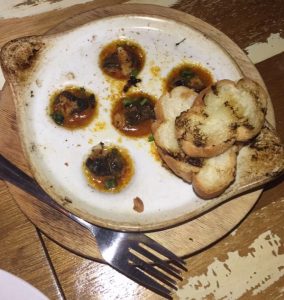 A tasty dish from Le Fat is their escargot. Photo: Elizabeth Marr

One of the best kept secrets of the West Midtown restaurant hub is Le Fat: a hip Vietnamese-French place at 935 Marietta St. If you can forgive its accusing title and swing by for a bite, you’ll immediately fall in love with the atmosphere, service, and most importantly, the food. Having never eaten real Vietnamese cuisine, I was determined to branch out of my comfort zone and give it a try.

If you’re a tea person, Le Fat makes the best green tea I have ever had (and I’m a green tea enthusiast). My friends and I started with a round of appetizers: Wonton Dumplings and Escargot. Inside the dumplings were shrimp and pork, chili oil, shallot and cilantro – a delicious and flavorful combination. Next came the escargot. I don’t know how to describe its taste except by saying it reminds me a bit of chicken. I enjoyed it and would definitely order it again.

My entree was called “Ga Ko Noi Dat Set” (Claypot Chicken). The dish was probably the most perfectly seasoned chicken I have ever had. I would highly recommend this main course to someone who is just beginning their venture into Vietnamese cuisine.

One of my friends tried the Pho (Noodle Soup), a traditional Vietnamese dish. This soup is best compared to a comforting Asian version of chicken noodle soup. Another friend had the Com (Rice Plate), which consisted of rice, pickled cucumber, carrot, egg and a choice of pork, chicken, beef and shrimp. I would give both of their dishes a perfect 10/10.

Both of my friends are picky eaters but they did not shy away from the array of options that Le Fat had to offer. The foods we tried were not too different for the American palate, and they loved their meals. My tea, two appetizers and three entrees came to a total of $60. This is, in my opinion, underpriced for the quality of both the food and service. If you’re taking a friend or a date out for a meal, Le Fat is perfect, because the food is amazing and affordable. The restaurant is open seven days a week from 5-10 p.m. I would recommend Le Fat for groups, families, dates, foodies and anyone ready to experience one of the best meals in town.