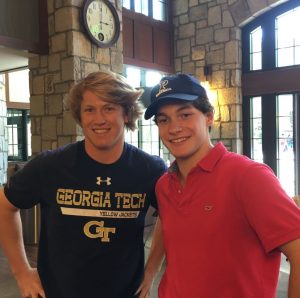 After starting to play baseball at age three, Jenkins fell in love with the game. “It is much more challenging than people think,” he said. “Baseball is one of the only sports that you can fail seven out of every ten times and still be considered to be a hall of fame baseball player.” One of the reasons that he chose Georgia Tech is its proximity to his home, which allows his parents to watch more of his games. “Georgia Tech offers a very strong ACC baseball program with great coaching and facilities,” said Jenkins. “It also allows me to earn a great degree to fall back on if baseball does not work out as a profession.”

Even though he has already verbally committed, Jenkins must continue to keep up with his school work over the next two years because Georgia Tech still requires exemplary academic performance to get accepted. Jenkins aims to get playing time at Georgia Tech as a freshman and possibly be drafted into the MLB straight out of high school. “I would love to play baseball as long as possible,” he said. “Playing a game you love for a living sounds like a pretty good job. If baseball doesn’t work out I would love to stay connected to the sport in some way.”

Zeldin began playing baseball at age five. His dad played baseball in college, and because none of his older brothers decided to play, he wanted to continue his dad’s legacy and give it a try. “In baseball, nothing beats the feeling of getting a hit or striking someone out,” he said. “Also, being around your teammates in a competitive, fun atmosphere is exhilarating and truly a blast.”

Zeldin believes that the University of Pennsylvania has everything to offer. They gave him an opportunity to enter the Wharton School (the university’s business school), and continue his baseball career playing for the Quakers. Being committed to college so early is a huge relief for Zeldin. “I don’t have to worry about where I’m going to school, what colleges are watching me play, or about getting offers anymore,” he said. Although he has almost reached the same status that his father once did, Zeldin is not done with his dream of playing beyond college. “My number one dream in life has been to make it to the major leagues and stay there,” he said. “I won’t stop playing baseball until I have to, because it is truly my passion.”