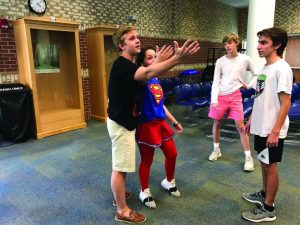 Upper School Theatre Director Sean Paul Bryan announced with a booming voice during the first week of school that the fall musical this year would be “Joseph and the Amazing Technicolor Dreamcoat.” The show, which received six Tony Award nominations including Best Musical, is based on the story of Joseph in the Bible’s Book of Genesis. With lyrics by Tim Rice and music by Andrew Lloyd Webber, “Joseph” made its first appearance on Broadway in 1982, followed by national and international tours in the next couple of decades.

The musical was hand-picked by a team of faculty members, including Mr. Bryan. According to Mr. Bryan, the process of choosing the fall musical is not as straight-forward as it may seem. “There are a lot of boxes you have to check off,” he said. “We have to take into account the student body and their interests, as well as past shows that Pace has done.” Mr. Bryan also believes that the selection for the musical should challenge the typical Pace student to think more deeply about the topic while also enjoying the show.

Mr. Bryan also wants to have some variety to the musicals so that students who act in musicals throughout their high school career will have experienced different types of musicals. “I think certain material should be a part of a student’s cultural knowledge, and I believe that this musical provides that,” said Mr. Bryan.

“Joseph and the Amazing Technicolor Dreamcoat” is different from Pace musicals performed in the past two years because it is an ensemble piece, whereas “Legally Blonde” was a book musical with modern music and “Thoroughly Modern Millie” was a book musical with a classic genre. An ensemble piece is a show that does not have one main character but several actors who play roles that are all equally important. “We wanted the students to really embrace the ensemble piece,” said Mr. Bryan. “That way they can really make up the show and be the foundation.”

In the original production, the narrator plays an important role since characters are mostly singing and there is very little dialogue. For the Pace production, the role will be split into three narrators, played by senior Paige Demba, sophomore Nikki Rubin and freshman Audrey Holton. “Having this role is a big honor,” said Holton. “I’m actually not that nervous, even though I know it will be a big responsibility.”

The protagonist of the story is Joseph, who will be played by senior Jeb Carter, and senior Will Nulty is set to play Joseph’s father, Jacob. “I’m really excited for opening night,” said senior Cole McCorkle, who plays Reuben. “We’ve all worked really hard in rehearsals.” Mr. Bryan and the actors had to multitask, rehearsing for September’s one-act “The Brute” while also preparing for the musical.

The show opens on Nov. 9 in the FAC, with four performances through Nov. 12.