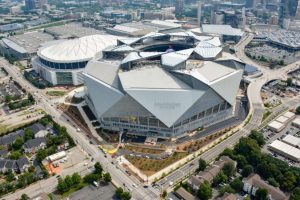 For the first time in 25 years, the Falcons did not kick off their season in the Georgia Dome. Instead, they played their first home game on Sept. 17 in the brand new, $1.6 billion Mercedes-Benz Stadium.

The stadium also hosts the new soccer team Atlanta United (ATL UTD), which set the record on Sept. 16 for most attended Major League Soccer game ever with 70,425 people in attendance for its match against Orlando City SC.

The stadium has received high praise from sports fans for its technologically advanced construction as well as its size and modernity. “The stadium captivates you as soon as you walk in, especially with the new Halo Board,” said sophomore Morgan Payne. The Halo Board, which is a 360 degree video replay board, spans the whole roof of the stadium and, at 58 feet tall and 1,100 feet around, is the first of its kind.

Another fixture of the stadium is the massive 73,000 pound steel statue of a Falcon outside Gate 3. Created by Hungarian artist Gabor Miklos Szoke, it is said to capture “the moment of a touchdown.” “The falcon represents the prowess of the Falcons and especially their recent dominance because it is so big,” said sophomore Sam Adams. One of the most popular parts of the stadium, it is a spot for many pictures from fans.

Another popular feature is the wall of helmets that represent every high school football team in Georgia. Directly below the helmets, a long plaque honors some of the best NFL players to play high school football in Georgia, including Cam Newton, Champ Bailey, Calvin Johnson and many others. “I think it’s cool that a team as good as, and playing on such a high level as the Falcons, are able to take the time to honor all the high school players in Georgia,” said Adams. It is the only NFL stadium with this feature.

Lastly, and maybe the best part to some, is the reasonable prices for food and water at the various concession stands and restaurants. The prices were lowered considerably from what was charged at the Georgia Dome, with the goal of making a game both more affordable and more enjoyable for the fans.

The stadium is now officially open for tours, costing $25 for adults and $20 for kids.